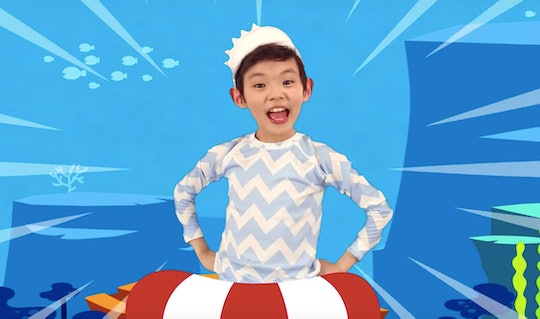 If you're a parent of pretty much any child alive right now, you're undoubtedly familiar with the Baby Shark song, a hauntingly repetitive tune about a family of... sharks... that will have you singing doo doo doo doo doo doo doo in your sleep. But there's a brand new twist on it that may just get you in the shark spirit: this Baby Shark workout challenge video will make your abs hurt just watching it.

If you're going to be subjected to hours of the song on repeat regardless, consider trying the Baby Shark challenge, which was started by a trainer named Emily Bridgers. To do the challenge, you lay on your back with your arms and hands in the air, and during each verse of the "doo doo doo..." you do a different core workout, such as moving your hands and feet together to meet above your head, or alternating your knees and arms touching one another.

The catch? The entire thing has to be done without a break. That means your arms and legs are in the air the entire time, even when you aren't moving them. Yeah, it's a serious core workout, and TBH, it will kind of make your stomach hurt just watching someone else do it.

After Bridgers posted the clip of what appears to be her gymnastics students completing the challenge, many people in the comments went on to speculate whether or not they could also complete it, tagging their friends and challenging them as well.

Mostly though, commenters expressed their total awe for the girls who were actually able to do it. "Ouch, my abs! Great job girls!" one comment read. "Wow they are crushing it!! No way I could hang with these little balls of muscle," said another.

Earlier this month, The Sun reported on the phenomena that has become the Baby Shark Challenge, explaining that it's actually taken quite a few different forms. (In one version, a dad is wearing a shark costume and doing the dance standing up outside the car.) The Sun also explained that the song began as a sing-along for kids by the YouTube channel Pingfong, which has over 10 million subscribers.

At the time of writing, the Baby Shark Dance (original) has 3.3 billion views, making it one of the most viewed YouTube videos of all time.

However, a solid workout was not the only use that people have found for the Baby Shark song.

In fact, Holly Willoughby and Phillip Schofield from This Morning actually did a segment in which they taught viewers how to perform CPR, as the beat of the song was "perfect" for resuscitating someone who is choking or who has stopped breathing, The Sun later reported as well.

Ultimately, it seems as though Baby Shark has found its way to becoming a cultural icon of a song. Whether it's inspiration for ab day, a tune to recall if you're ever performing CPR, or at the very least something you keep on repeat to ensure your toddlers are quiet for just a few minutes, Baby Shark is totally here to stay... and evidently, make all of our lives better, one "doo doo doo doo doo doo doo" verse at a time.