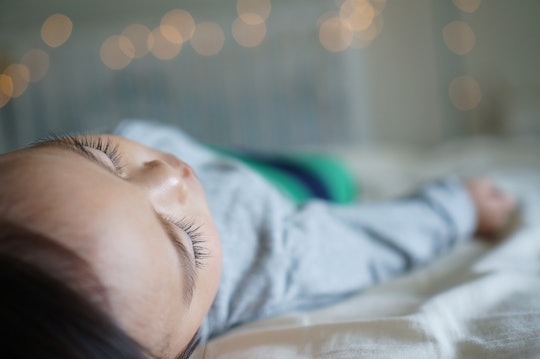 We're just weeks away from Halloween, American Horror Story is back, and not to mention the collective tension and weekly horrors of this year's presidential campaign. But arguably nobody is as spooked right now as Mikaela Long, who tweeted a picture of this baby sleeping on her head that freaked out the internet.

Long, who is best known for her hilarious Vines (that are often made up on the spot with her quirky knack for improvisational humor) already has quite a significant social media following. She has more than 1 million followers on Vine, and back in April she won the Shorty Award for Vine comedian of the year. Of Long, the Shorty Awards said, "With a flare for the dramatic and eyebrows that are always on fleek, Mikaela’s 500k followers watch her perform hilarious sketches and impromptu karaoke moments that almost always scare her mother in the driver’s seat of her car."

Still, despite her fame in her own right, many people have only discovered Long this week after she tweeted a terrifying but also hilarious image that showed up on the baby monitor while she was babysitting her niece:

While Long didn't know what to make of it, the child's mom — who asked the media not to use her name — told BuzzFeed that not only is the image real, but it's something the baby's been doing for a while now. “It baffles me as well,” the tot's mom admitted. While Long was freaked out, she seems to have not missed the opportunity to find the humor in it:

As strange as it might sound, babies often do really weird stuff in their sleep: they might twitch, snore, snort, have long pauses in their breathing, kick things, head bang, and, in general, just take a while to get the hang of sleeping all night. In terms of acrobat-like sleeping positions, that's actually not that unusual either; and most pediatricians believe that as long as the baby is sleeping well, the position (no matter how strange) is likely fine.

What is important to look out for, though, is if a baby is having trouble breathing when they're sleeping. Sometimes a baby or young child will take on a bizarre sleeping position because they're instinctively trying to make it easier to breath. If a baby's breathing is labored, raspy, or otherwise uncomfortable, it might be a sign of an underlying health problem that needs attention; especially if they're also contorting themselves into positions that could rival The Exorcist.