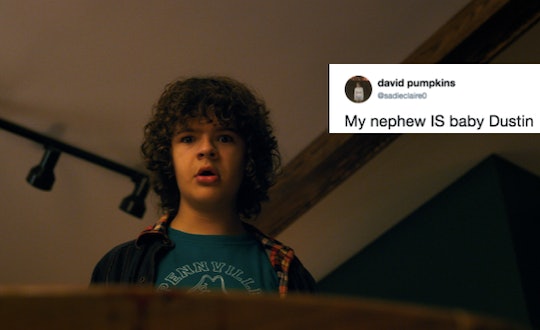 This Halloween, most people saw at least one Stranger Things-inspired costume — if not entire packs of characters from the Upside Down — roaming around town, but last week, one Twitter user managed to one-up pretty much everyone else's Stranger Things costumes. User Sadie Claire shared a throwback picture of her nephew, a baby who looks just like Dustin from Stranger Things, and it's safe to say that the entire internet instantly fell in love with actor Gaten Matarazzo's tiniest doppelganger.

Twitter user @sadieclaire0 shared a picture of her nephew last week in honor of the release of Stranger Things' second season. She captioned the original picture, "My nephew IS baby Dustin," and judging by the nearly 64,000 retweets and more than 150,000 likes it's gotten so far on Twitter, it seems like the entire internet agrees with her.

As it turns out, the baby in the picture has a twin (yes, that's correct, there are not one but two baby Dustins), and the two of them — along with their parents — dressed up as the most adorable group of Stranger Things characters last year. While this baby Dustin was clearly the star of the show (of course, since he looks like he could be Matarazzo's twin), the entire ensemble was amazing.

Here's a peek at the boy who will now forever be known as "baby Dustin" on the internet from now on:

Is it everything you expected and more? Yes? That's what I thought. If you already thought Stranger Things' Dustin was the cutest thing alive, then the idea of a younger, tinier Dustin in the exact same baseball cap is almost unbearable.

Romper has reached out to baby Dustin's aunt for comment on the photo, but did not hear back immediately. However, if you think you can handle some more cuteness, here's what appears to be Matarazzo's tiny doppelganger — dressed up as Dustin, of course — alongside his family last Halloween:

Needless to say, people reacted to the now-viral picture of Matarazzo's lookalike with all of the feels. Some Twitter users wanted to adopt (or, you know, straight-up steal) him, others immediately shared the picture with friends, and a few were ready to protect this absolute stranger's baby with their life. But can you blame them?

There were also, of course, many GIFs and heart-eyed emoji involved. The post also quickly collected close to 1,000 comments from people whose hearts exploded at the sight of baby Dustin.

If Stranger Things keeps being as successful in the future as it is now — or if Matarazzo's career continues to explode — this little boy's got a very profitable career as an impersonator in his future. (Or, at the very least, he's got a fantastic Halloween costume sorted out for every year from now on.)

The popularity of baby Dustin shouldn't really come as a surprise, considering how popular both Matarazzo and his breakout Netflix show have become. Ever since he joined the Stranger Things cast, Matarazzo's career has enjoyed a boost, with the 15-year-old actor participating in Katy Perry's music video for "Swish Swish" and starring in several ad campaigns. He has also awesomely helped raise awareness (and funds) for cleidocranial dysplasia, the genetic disease he has, which primarily affects development of the bones and teeth.

Stranger Things' second season only came out in October, but it's already taken over the internet. According to Forbes, Stranger Things showed the largest fan growth for any new series last year, with a total of 4.35 million viewers, as well as the second-highest social engagement for any new show. (First place went to Shadowhunters on Freeform, in case you were wondering.)

Hopefully we'll get to see baby Dustin meet the real Matarazzo one day — because something tells me that picture would actually break the internet.