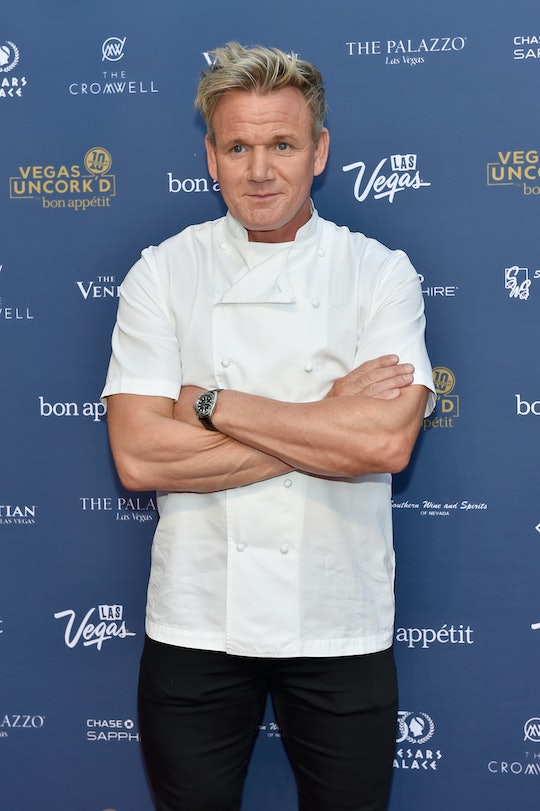 Gordon Ramsay is one of my favorite TV personalities. Even though he can be a little harsh at times, he means well and puts on some of the most entertaining shows on television — I mean, have you seen him with the kids on Masterchef Jr.? So cute and so sweet! It seems like people agree that Gordon Ramsay is one of their favorites. Because this baby who looks like Gordon Ramsay is making the Internet freak out.

It all started out so simply. Twitter user Claire Dempster, @claire8ball, tweeted out a picture of her son. Her son, Arlo-Blue, is pictured in his mother's lap and looks so, so cute. Arlo-Blue is pictured wearing a white terrycloth onesie with buttons up the front that looks similarly to Ramsay's typical chef's whites uniform. Arlo-Blue also wears a worried expression, similar to Ramsay's, on his face and his bright blonde hair is spiked up in the chef's typical fashion. Basically, the little boy looks scarily like the celebrity chef.

"This is our baba — have you been in Wales for any reason 10 months ago" wrote Dempster in the tweet accompanying the photo, tweeting the picture directly to Gordon Ramsay, joking about the who the baby's father is.

And the Internet is freaking out because of it. The original tweet and photo received over 2,300 likes and over 1,400 retweets, drawing a lot of attention. Including attention from one very special person — Gordon Ramsay. The chef replied back to Dempster in a very hilarious tweet, letting the joking continue.

In another reactionary tweet to the photo, Ramsay states that he "feels sorry" for the baby. Don't be so down on yourself, Gordon! The kid is adorable. The likeliness is a compliment.

The rest of the Internet, however, is freaking out about the baby's close resemblance to Ramsay himself.

In a Buzzfeed News interview with Dempster, Dempster admitted she had no idea that Ramsay had replied to her original tweet and did not expect the photo of her son to go viral. She also admitted she was a big fan of Ramsay's.

But because they look so similarly, I wonder if Arlo-Blue has any ounce of Ramsay's personality. Does he spit up his milk in disgust and call it "pitiful"? Can he make a mean beef wellington? Does he attempt to hurl insults at his mom?