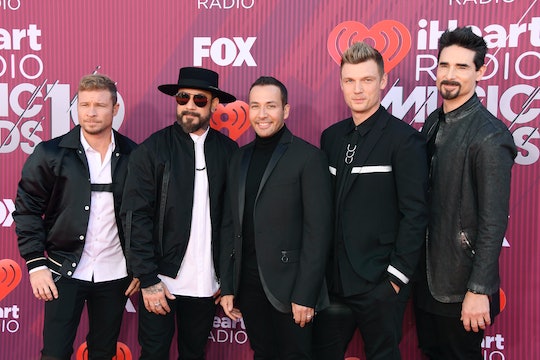 This Backstreet Boys Subway Singalong Will Warm Your Cold Heart

They say music is the universal language. From experience, I'd say "they" are definitely onto something. Regardless of language, ethnicity, political views, or race, music is something that has the power to bring us all together. It also has the power to randomly brighten someone's day — even during the evening commute after a crappy shift at work. And I guarantee this Backstreet Boys subway singalong will warm your cold, dead heart.

As Billboard reported, Joel Wertheimer — a civil rights attorney and the former Obama associate staff secretary — took to Twitter on June 16 to share the joyful moment inspired by the boy band's hit single "I Want It That Way." The video has since attracted 2.7 million views and nearly 35,000 likes. "Had a really tough week and tonight I was the subway and some guy walks between train cars, shirtless, bumping a speaker," Wertheimer tweeted. "I wasn't in the mood for Showtime particularly. But sometimes people and life surprise you and a little magic happens."

I mean, what could possibly be better than a train full of strangers jamming out to this 1999 hit? See for yourself the random magic that transpired in the video, below.

“Everybody was mumbling the words at first and then it just sort of crescendoed,” Wertheimer told Time. “Joyful is the best word I have for it.”

Another person who had also been on the same subway car added to Wertheimer's narrative, writing on Twitter, "My family and I were on this same car. Thanks so much for sharing this moment of NY magic. Tho, you missed the best part: when you all belted out the high part, “Don’t want to hear you...!” Also that collective groan when he walked off before the song ended. And applause."

And let's just say Twitter loved it all. One person commented, "Seeing complete strangers, of all different races and backgrounds, bonding together in this fashion puts the biggest smile on my face."

Another Twitter user wrote, "Part of what makes NYC special. Easy to hate it but also easy to love it!"

Yet another Twitter user joined in on the conversation, writing, "I used to feel public music was really intrusive. A friend told me they loved it, 'it's like I'm in a movie and this is the soundtrack.' That shift changed it for me. Even if I'm in a lousy mood, happy music has a certain irony."

Not long after Wertheimer's video started gaining momentum, he took the opportunity to invite Twitter to donate to the Coalition For The Homeless. “It’s impossible to take the New York subway and not be confronted with our terrible underinvestment in help for the homeless,” Wertheimer told HuffPost. “I think we (I include myself) often ignore people without homes on the subway as we try to get through our daily commutes."

Honestly? I probably would have been pretty annoyed by some stranger playing loud music on a crowded subway train. But after seeing this viral video, I'm kind of hoping I get to be a part of a random singalong someday. Ah, the power of the Backstreet Boys.