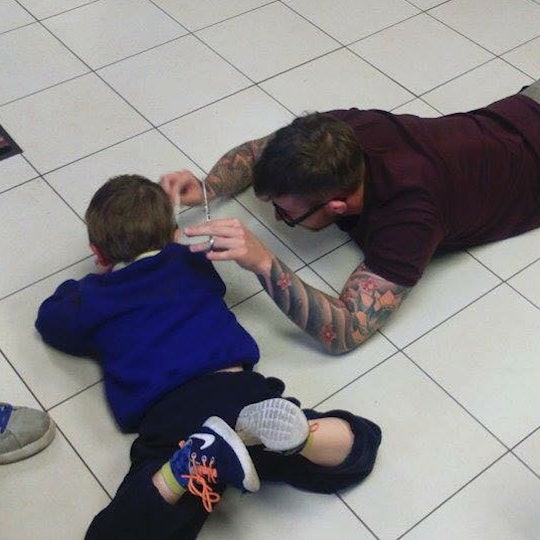 This Barber Did The Most Awesome Thing For A Child With Autism Who Was Afraid To Get His Hair Cut (And Also He's Kinda Hot, Which Isn't A Bummer) — PHOTOS

When UK barber James Williams of Jim the Trim first met Denine Davies's and Jamie Lewis's son Mason, it wasn't easy to get him in the chair to have his hair properly cut. In fact, it didn't even happen. Not for awhile, anyway. But Williams was patient and wanted to make it work for both Mason and his parents — which would make him the first barber to successfully trim the 3-year-old's hair. Mason, who had just months prior been diagnosed as being on the Autism spectrum, was very sensitive about being touched with scissors. (And, let's be honest, who really enjoys those big old shiny shears coming at you? OK, so maybe they aren't horror movie-grade, but to a little guy of three, they're easily nightmare-inducing.)

James Williams (who, for journalistic integrity, I should mention is really hot, which yes, does make this story even more enjoyable) was patient, and for three months, tried to make Mason feel comfortable enough to let him do a quick trim. It wasn't until Williams actually got down onto the floor, literally on the kid's level, that it worked.

While Mason lay comfortably on the floor, immersed in technology (because, who doesn't need their smartphones or tablets with them at boring hair appointments?), Williams got down on his stomach, and then sat up, and back down, and trimmed Mason's hair. He took to his Facebook to recount his success with Mason and the thrill behind making the boy feel comfortable and at ease with him, finally:

Today I finally achieved it where we both layed on the floor in silence & he allowed me to cut away & give him his first proper haircut, again achieving something in a job I love making both parents happy by giving extra attention to Mason by building a friendship and a trust with Mason & myself.

What gave the finishing touch, I asked for a high 5, he hugged me.

If making this kid feel comfortable after a patient three months is what Williams does at work, I have a suspicion my ovaries would explode if I saw him at action in real life. And because of his success with Mason in a spur of the moment idea to slide down to the floor and get on his level, tons of supporters have been recounting their own stories with their children who have autism.

When you have Autism Spectrum Disorder (ASD), you have a natural tendency to disregard people in your immediate space who you don't know and small children with with autism often find it even more difficult to express themselves. So it is a small wonder how this barber managed to figure out the key to making Mason feel at ease. But thanks to his patience over the three months, and repeatedly meeting with him, he was able to develop a unique sort of relationship with the 3-year-old.

In other words, this guy was every shade of awesome and patient, and it worked. (Which is a lot more than I can say for any of the pinch-faced, irritable women who treat my hair, but that's another issue.)

More Like This
12 Genius Floats With Canopies (& Cupholders), So You Never Have To Leave The Pool
From Captions To Gifts, These Are All The Kindergarten Graduation Ideas You Need
What I Want To Tell My Kids About Anxiety When The World Feels Unsafe
Celebrate Your Kindergarten Grad With These Sweet Instagram Captions