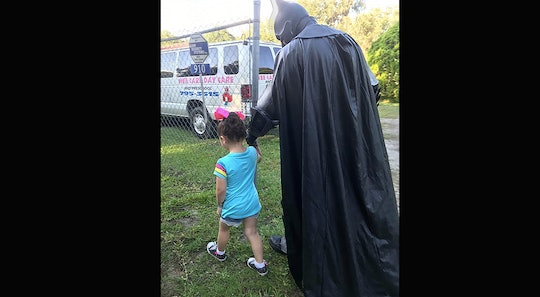 Photo Courtesy Of The Batman Of Spring Hill

Imagine getting a little help from the Caped Crusader himself. That's exactly what happened to mom Erica Adrianne Calculli and her 3-year-old daughter, Lydia, of Spring Hill, Florida. Lydia was having trouble making friends at preschool, so Gotham's number one superhero stepped in to cheer her up. This Batman impersonator walked this three-year-old to school and proved once and for all that superheroes really do exist.

It all started when Calculli posted about Lydia, who she said was being bullied in her preschool class. "She’s a very smart, bright child and social,” Calculli said, according to Inside Edition. “Lydia has been coming home with bruises on her face. At first it was very minor and I thought it happened just playing around. Two weeks ago, she had a black eye but didn’t say why. It breaks my heart that other kid are hurting my baby physically and emotionally."

As the days progressed, Lydia no longer wanted to go to school, according to her mother.

That's when Jack Asbury, also known as The Batman of Spring Hill, jumped in to help. He asked Calculli if he could walk Lydia to school, hoping to brighten the little girl's spirits. And that's exactly what he did.

"I made a new friend today. This is Lydia," he captioned shots of himself walking alongside Lydia. "I was heartbroken when I saw her mothers post she was being bullied in school. To the point she didn't want to go."

He continued, So I reached out and asked if I could walk her to school. Hopefully this will help her over come the fear knowing who has her back. Also got her a cool outfit to be my side kick."

As for exactly what he did that day, he told Inside Edition: “I knelt down next to her and told her she is going to have a great day and she will be just fine. While beside her, I looked at [her classmates] and told all of them that she is my very best friend, and I would be back to check on her.”

He even brought her a bedazzled superman jumper complete with a sparkly tutu. “At first she was shy,” he said. “I gave her the superhero dress and explained how she was brave like Supergirl and would love her to be my sidekick.”

According to mom, Lydia hasn't stopped talking about Batman since, and definitely gained some new preschool friends. This was Asbury's goal all along, as he tells Romper via Facebook messenger he was eager to help Lydia "gain some of her confidence back."

The morning after he walked Lydia into her classroom, Asbury said he received a text from Calculli saying, according to Yahoo: "A little boy came up to Lydia as we walked to school this morning and said 'hi best friend Lydia,' took her hand and walked her to class. Seriously made me cry. Thanks for being there for my baby."

Right now, Asbury is raising money for what he calls The Bat Fund, so he can do more for community children in need. And if he can do this for Lydia, imagine what he can do for other kids in need. In the meantime, Asbury works as an EMT.

Here's hoping Lydia's school year continues to be super. And if she happens to need any more help, her friend Batman will be just a bat signal (or text) away.