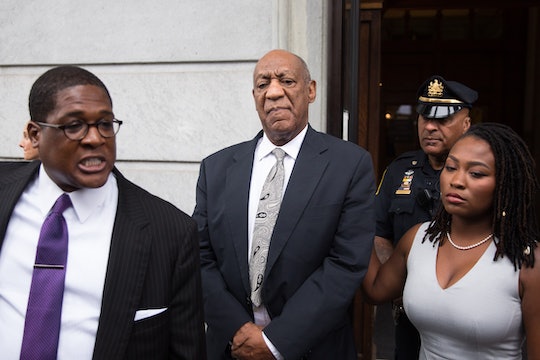 This Bill Cosby Mistrial Tweet Sums Up Why Sexual…

After six days of deliberation, Montgomery County, Pennsylvania Judge Steven O'Neill sent the jurors in the Bill Cosby case home and declared a mistrial. Although responses to the outcome of the trial are varied, there are some Bill Cosby mistrial tweets that address how this "mistrial" verdict in a sexual assault case is all too common.

Judge O'Neill said to Cosby in the courtroom, "it's not a failure or a victory." Addressing the jurors, he assured the group that they had done their best civil duty. But still something feels off to many observers of the trial. On social media, there was outrage. Romper's request for comment from Bill Cosby's legal team was not immediately returned.

Technically, Cosby got a fair trial, despite protests from his legal team and allies that he had been slandered. According to CNN, a member of Cosby's legal team told reporters after the verdict:

This tweet sums up the other side of the story.

Because of statutes of limitations and other reasons, many of Cosby's alleged victims didn't come forward at the time of the alleged assault. Many of them have spoken to the press about how they felt that their alleged assault would be hard to prove in a court or that Cosby's interactions with them didn't seem illegal at the time. That attitude is the definition of rape culture.

Although Cosby did not testify in this trial, Constand did. Actually, the jurors asked to hear her version again during their discussions of the verdict. What she describes sounds a lot like rape. But she was not believable to the legal standard of "reasonable doubt" for the jury.

This mistrial shows that if you want to report assault, apparently, it has to be timely. It has to be documented. And if there are substances involved, you're sort of out of luck.

Here are some statements from other Cosby accusers.

Cosby should enjoy all of the legal privileges given to him with this verdict, but his alleged victims still feel like the don't have a voice.