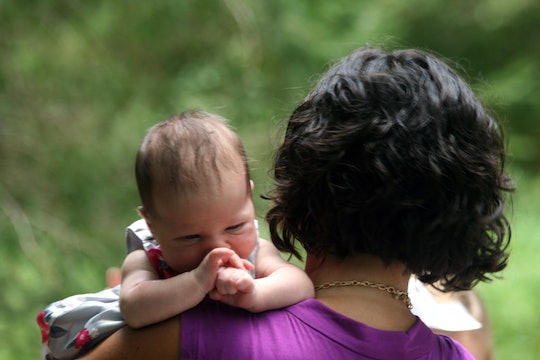 This Bill Would Compensate Family Caregivers, & It's A Huge Deal For Stay-At-Home Parents

Women in America make up nearly half of the workforce, but when they choose to have a child or look after a loved one, they're often penalized for it. When men or women take on a caregiving role, they often have to step out of their full-time job — which means losing out on wages and any benefits. A new bill proposed by Connecticut Sen. Chris Murphy (and backed by Vermont Sen. Bernie Sanders) is trying to even the field for caregivers: the Social Security Caregiver Credit Act would provide retirement compensation to caregivers (this would include mothers!) in an attempt to ease that burden.

No one should have to pick between ensuring their own future and taking care of an aging parent or raising their children — but that's a choice that women routinely have to make. According to the Centers for Disease Control and Prevention, 21 percent of households are impacted by caregiving duties, and unpaid caregivers provide 90 percent of long-term care. The typical caregiver is a 46-year-old woman, and women make up two-thirds of unpaid caregivers.

Not only do unpaid caregivers take on added expenses — the average yearly cost of caring for a person over age 50 is $5,531, and any parent can tell you that raising a child can easily cost double that amount — but they lose benefits previously supplied by employers, meaning they're also on the hook for their own healthcare and Social Security.

How would the Caregiver Credit Act work? First of all, those who provide more than 80 hours a month of caregiving to a family member or partner who can't perform daily activities without assistance would be eligible for the credit, and would be eligible to receive it for up to five years. This credit would be added to the individual's earnings to calculate their Social Security benefits and would vary depending on the individual's income compared to the average national wage. If you eventually earned more than the average national wage, you'd be phased out of the program — but if you earn zero income, you would receive the maximum credit allowed, which would be half the average national wage.

It's a necessary fund once we're older and out of the work force — and nobody should be penalized for providing for their loved ones. Hopefully this bill will be passed, since caregiving is hard enough without worrying about your own future.