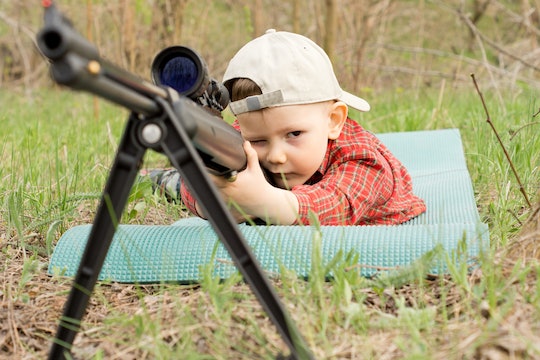 Joining 34 other states with no age restrictions for hunting, the GOP Wisconsin state assembly recently introduced a bill that would make it legal for toddlers to hunt with guns, as long as they're with an adult and following certain rules. Right now, according to the Associated Press, children in Wisconsin can hunt at the age of 14 alone. And under current law, at 12 and 13 years old, they can hunt with a parent or guardian and have to get a hunting safety certificate.

Children who are 10 and 11 years old don't have to take a safety training course, but can go on "mentored hunts," the Associated Press reported. This essentially means that they're accompanied by an adult with a hunting license and have to follow certain rules, like only being able to hunt within an arm's reach of the "mentor," according to HuffPost. The mentor hunt also means that there's only one gun on the trip.

However, if the bill is signed into law by Wisconsin Gov. Scott Walker, there would be no age restrictions at all. This would make it legal for kids under 10 years old to hunt with their parents or guardians, meaning that they would each have guns. Republican Rep. Rob Stafsholt, the bill's author, told ABC 2 in Wisconsin on Friday, "We’re returning the choice to the parent." According to the Wisconsin State Journal, he added that he was able to handle a .22 caliber rifle at 8 years old.

Supporters of the bill believe that parents should be able to decide when their children are capable of handling a gun while out on a hunting trip with their parents or guardian, according to The New York Times. Stafsholt, for example, said that his daughter killed her first bear when she was 11 years old, but that he had held her back at 10 years old because he didn't think she was ready, according to the Associated Press.

During the debate, studies were reportedly presented to show that if children don't express an interest in a hobby before 10 years old, they might never get into it at all, which seems to be a concern for hunters who want to make sure their kids have the same interests as them. Rep. Gary Hebl expressed his concern that they were taking that line of argument. According to the Chicago Tribune, he said during the debate:

It’s just crazy [the minimum age] would go below 10. Absolute insanity that we’re talking about giving a kid a gun at any age so they experience the heritage of hunting. The most important factor is safety.

Joe Slattery, a concerned parent, told ABC 2 that he thought it would lead to more hunting accidents. Slattery told the outlet that he lost his own son during a hunting accident. "You can get them involved at six, by taking them hunting with you, that's perfectly legal right now, you just don't have to put a gun in their hands, my son was killed at the hands of another 13-year-old," he told ABC 2.

Hunting "accidents" happen all the time, and are often deadly. According to the Wisconsin Department of Natural Resources, many of the hunting accidents occur even when people are safety certified. Like a 13-year-old who "misgauged" his safety zone and shot a 73-year-old man who is now unable to see out of his right eye, according to the Wisconsin Department of Natural Resources data on 2017 accidents. The same agency reports that a 15-year-old who was "planning a sneak up on turkeys" and asked his friend to "toss the handgun," was also shot after it landed on the console of their car and fired.

If teenagers and adults can make mistakes, it's easy to see how younger children — who may have trouble following rules or gauging what's safe or not on their own — would make the same ones. That's why the current law doesn't allow the young kids to go on a hunt with their own gun, which seems reasonable, especially if everyone's goal is just make sure parents can include their kids in their passions. Simply being able to tag along should be enough.

But not everyone feels that way, and Wisconsin's laws are definitely not the loosest when it comes to hunting with kids. According to the Wisconsin Hunter's Rights Coalition, there are 34 other states in the United States that have no minimum age restrictions on hunting, which means there are young kids all over the country who are already hunting with their own guns.

When the bill goes to a vote, likely this Tuesday, hopefully Wisconsin legislators will consider children's safety as the top priority.