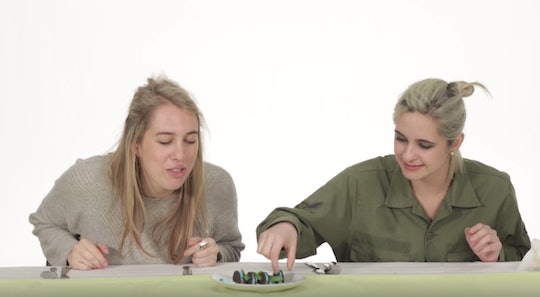 This Book Has A Gourmet Recipe For Every Pregnancy Craving, & It's Hilarious

Nearly every mom — or her partner — has a story about the wild and wacky food she craved during her pregnancy. Pickles and ice cream? Yep. Dijon mustard on everything? That's a thing. Burnt matches? That is also, apparently, a draw for some women. Pregnancy cravings are clearly a universe unto their own — and two authors finally decided it was time for those cravings to be compiled into a proper collection. Meet Pickles and Ice Cream: A Bizarre Pregnancy Cravings Cookbook. This book has a gourmet recipe for every pregnancy craving out there, and it's guaranteed to get you laughing. (And maybe cooking, too.)

Advertising professionals and authors Vicky Jacob-Ebbinghaus and Juarez Rodrigues are the two geniuses behind the cookbook creation. They first came up with the idea after their pregnant friend told them she was sneaking out of bed to eat Oreos with toothpaste in the middle of the night, according to Today.

The book was released on July 11, and it's already receiving pretty stellar reviews from both readers and publications. It contains gourmet recipes for meals like a bacon and Mars Bars burger, orange sushi with a tomato sauce glaze, choc-olive cake, and popcorn on a bed of sauerkraut. (Mm, mm, good.)

Every recipe features a hilarious review from Jacob-Ebbinghaus and Rodrigues, which you can get a taste of on their website. Sausage and jam? "This is what disappointment tastes like." Choc-olive cake? "The perfect birthday cake for your enemies."

Researchers still aren't 100 percent sure why women start dreaming of certain foods while they're pregnant, according to Today's Parent, but some believe cravings might have something to do with pregnant women's increase in hormones. Despite popular belief, cravings don't actually indicate certain nutrient deficiencies, either — so there's no real justification for moms' strange cravings for popcorn sauerkraut or buttered watermelon (and yes, that's another recipe in the book).

Regardless of what causes the cravings, the cookbook's authors had a great time crafting the peculiar food combos. "We really enjoyed recreating the recipes and imagining what they would taste like before we tried them," Jacob-Ebbinghaus told POPSUGAR in May. "There was also a bit of schadenfreude watching the other person try the dishes, too — we laughed quite a lot."

Researchers estimate that about 50 to 90 percent of all moms get food cravings during their pregnancies, according to LiveScience, so the recipe book makes the perfect little gift to give to your friend who's expecting. However, buyer beware: your friend might just invite you over for dinner afterwards.

More Like This
What Foods Fight Nausea During Pregnancy?
Is Raspberry Leaf Tea Safe To Drink During Pregnancy?
OB-GYNs Explain The Connection Between Stress & Miscarriage
22 Valentine's Day Pregnancy Announcement Ideas Sweeter Than Candy
What Parents Are Talking About — Delivered Straight To Your Inbox