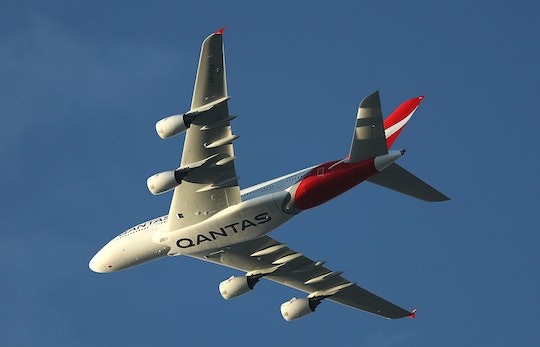 Parents are always telling their children to dream big, but few little ones actually start chasing their dreams at a young age. That's not the case in the story of Alex Jacquot, the 10-year-old boy who wrote to an airline CEO for advice starting his own airline one day, as reported by NDTV. The boy received a heartwarming response from Qantas executive Alan Joyce that will leave you a pile of mush.

Alex, an Australia native, wrote to Joyce, Qantas' CEO, about his future company, "Oceania Express," as NDTV reported. He was seeking tips and tricks about succeeding in the business, according to the outlet, and plead with Joyce to "please take me seriously."

Young Alex outlined his business plan in the letter, shared by Qantas Airlines in a tweet, revealing that he'd already sorted out catering and hired a full staff, but was struggling with the idea of sleeping people comfortably during long flights. Joyce responded in the sweetest way, according to the tweet, sending a lengthy letter full of ideas back to the boy, in which he claimed he'd "heard some rumours of another entrant in the market."

"First, I should say that I'm not typically in the business of giving advice to my competitors. Your newly-appointed Head of Legal might have something to say about that, too," Joyce wrote. "But I'm going to make an exception on this occasion, because I too was once a young boy who was so curious about flight and all its possibilities."

Joyce went on to reveal his "number one tip for starting an airline," which was to focus first on "safety." He went on to say in the letter, tweeted by his airline, "And do everything you can to make travel as comfortable and affordable as possible for your passengers. That's been the Qantas way for almost 100 years, and it's worked for us."

As far as Alex's query about sleeping on lengthy plane rides, Joyce said in his letter it's "something we're grappling with too," revealing that the airline is working on a plan called Project Sunrise, which would fly people from Australia's eastern coast to London non-stop, according to The Points Guy. According to the tweet, he went on to reveal different ideas Qantas has toyed with, including "cabin designs that gibe people spaces to stretch out and exercise."

Alex will have the chance to get some hands on experience in the airline business, according to the tweeted letter. Joyce invited the boy, whom he referred to in the letter as "the CEO of Australia's newest airline," to attend a meeting with him related to Project Sunrise. Joyce wrote in the now-public letter that he hoped to "compare notes" with Alex, and give him "a tour of our Operations Cenre."

Qantas tweeted a photo of the boy holding his letter from Joyce on Twitter. Former employees, people who have flown Qantas in the past, and more were moved by the post, flooding the replies with praise for Joyce and the airline. One Twitter user, who claimed to be "a former Qantas employee, said she "could not be more proud" to be linked to Qantas after what they did for Alex. Another Twitter user called the exchange of letters between Joyce and the youngster "the nicest thing I read today!"

I couldn't agree more. If that story doesn't make you want to nourish your kid's dreams, I don't know what will. You never know who your son or daughter may grow up to be.