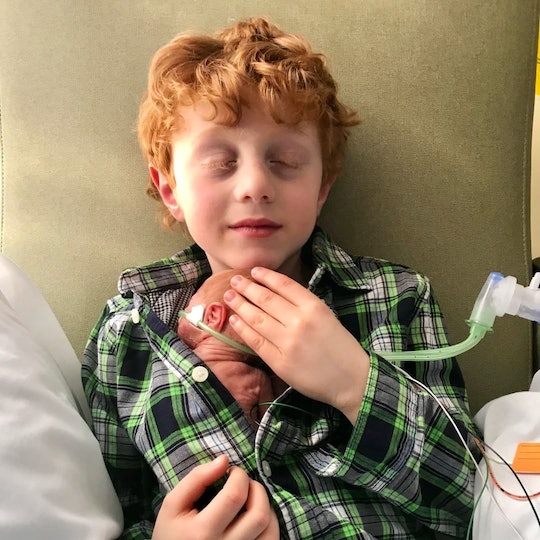 Someone Pass The Tissues: This Video Of Two Brothers Doing Skin-To-Skin Is Just Too Sweet

Making skin-to-skin contact with your baby right after they're born has been proven to have benefits for both the baby and for the parents. But when 6-year-old Mikey finally got the baby brother he'd been dreaming of, according to People, he became the first sibling in the hospital's history to be allowed to make skin-to-skin contact. Mikey and baby Jake's parents posted a video of the new big brother doing skin-to-skin with his newborn baby brother, and it's clear that these two brothers already have a very special bond.

Mikey's mother, Jessica Marotta, shared the story of how her family came to be in a blog post for Love What Matters. As she explained in the story, Mikey wanted a baby brother ever since he was 3 years old, and he made that very clear to his parents. In 2016, as she shared on the blog, Jessica and her husband Michael found out they were expecting again. They were so excited to give Mikey a little sibling, but decided to wait until the first trimester was over to tell him. When Jessica was 11 weeks along, in January 2017, according to her post, she had a miscarriage.

"Our hearts were broken," Jessica wrote in her blog post. "I was 11 weeks and we thought we were just a week away from being able to safely share the news with the others in our lives."

Jessica decided to send tissue for testing to find out what went wrong with her pregnancy. Over the phone, she found out that she had been pregnant with a boy. On the blog post, she wrote:

Before the OB hung up, I had to know… "Did you find out the sex?," I asked. She kindly answered, "yes, it was a male." It took my breath away. Mikey had gotten his baby brother, except now he was our angel baby.

Then, in the summer of 2017, Jessica found out she was pregnant again. She gave birth on March 6, 2018, via an emergency C-section at just 30 weeks along (the ideal length of human gestation is 40 weeks, according to the National Center for Biotechnology Information). Her baby boy Jake weighed 1 pound, 12 ounces, as she shared on her blog post, and he measured 12 inches long, which Jessica wrote is the size of a 25-week-old fetus. "I got to see his teeny face for a moment before he was whisked to the NICU," Jessica wrote. "Once I recovered a bit, I was wheeled on my stretcher to see him and his smallness took my breath away and my eyes filled with tears."

When Mikey came to the hospital to meet his little brother, it was love at first sight. However, he had to wait a week and a half before he was allowed to hold him. On March 17, Mikey became the first person to do skin-to-skin with a baby sibling at the Beth Israel NICU in Boston, according to Jessica. She wrote:

During one of my daily rounds with Jake’s nurses and doctors on day 10, I asked if Mikey could do skin to skin with his baby brother, fully expecting them to say no. I was beyond thrilled when they agreed! ... It was amazing and emotional, and I truly believe became the foundation for their brotherly bond.

Jessica further opened up about the emotional experience between her two sons in an interview with People. "It was very sweet. [Mikey] was very excited ... When he started holding Jake he just giggled, it was a nervous giggle," she told the publication. "He blinked a lot because he was really emotional. It was probably one of the most emotional things I’ve ever seen without a lot of tears because he was so happy at the same time."

She shared a video to Instagram of the tender moment, and be warned: watching it may cause excessive happy-tears.

Skin-to-skin contact has a variety of benefits. For example, it promotes healthy weight and growth, because the baby doesn't need to use their own energy to regulate their body temperature, and can use that energy for growing, according to a study published by the Cochrane Library. Additionally, skin-to-skin can help the baby's brain development, it can reduce the baby's stress, and it promotes bonding, according to Fit Pregnancy and Baby.

Jessica and Jake spent 62 days in the neonatal intensive care unit (NICU). Now, at nearly 5 months old, baby Jake seems to be doing well — not to mention, his relationship with Mikey is the sweetest thing ever. “Jake has brought a calmness to Mikey … even if Jake’s screaming, Mikey comes over and tries to calm him down, soothe him,” Jessica told People. "He was made to be this big brother."

Now, Jessica and Michael document their sons' unbreakable bond on an Instagram page called @themarottabrothers. It's clear that they are all so happy to be part of their special family of four, and I have no doubt that Mikey and Jake will continue to have an extraordinary bond for the rest of their lives.