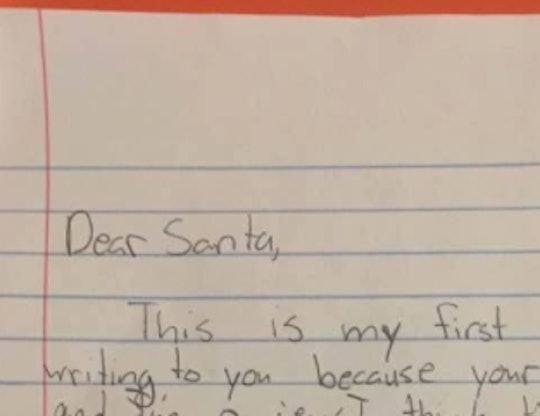 This Boy Had To Write To Santa For School, & His Letter Is Legit Hilarious

This just in: Not all kids celebrate Christmas. Some are Jewish... which means they celebrate Hanukkah — I didn't think that needed explaining. But when one public school kid was given an assignment to write a letter to Santa, his clap back was pretty epic. He actually explained things quite well.

The letter addressed, "Dear Santa," reads "your not real and I'm a jew." The student, who signed the letter as Jason (aka Ari, which he also wrote in Hebrew), writes:

I think it is very inappropriate in public school for homework. Don't worry about not stopping by my house all these years. I'm one of the chosen ones. So, happy Hanukkah and have fun delivering presents or whatever.

A woman named Debbie Wolf Goldsmith shared a photograph of the letter on her Facebook page on Dec. 16, and it's simultaneously concerning and cracking up commenters. At the time of writing this, the post has already garnered almost 700 shares and likes and has 30 comments. One man simply said, "Straight up gangster." Another woman wrote, "Hysterical and one smart boy. I remember being one of 3 kids to make a Hanukiah instead of a Christmas tree art project." And another woman who could also relate shared, "When my kids started in our district — one has since graduated — this was actually a 1st grade writing assignment! Luckily the Jewish families came together and got it out of the 'curriculum.'"

It's not the first time Jewish kids in public schools have been asked to write to old Saint Nick, according to Kveller, an advice blog for Jewish mothers. In 2014, a student was told he had the "choice to either not do the assignment, citing his beliefs, or to have a little fun." He chose to have some fun by asking Santa Claus for the Infinity Version 2.0 Marvel Superheroes Edition and jelly donuts to eat on Hanukkah — he even asked Santa to join him.

Earlier in the month this year Reuters reported that another kid was asked to write a letter to Kris Kringle, too. This kid, however, didn't think the assignment was so fun. The 6-year-old boy from Virginia went viral on social media after he penned a savage message, in which he called Santa's life "empty." His mother, NPR reporter Sarah McCammon, posted the letter on Twitter on Sunday Dec. 3 and, by Monday Dec. 4, Twitter featured the letter on Moments, where it pulls together all of its most popular and relevant topics.

The boy refused to identify himself, signing the letter, "Im not telling you my name." His mother told Reuters via email how she taught her children that Santa is a "fun story" and Christmas presents actually come from real people. That said, she notes that she has encouraged her children to keep the truth about Santa to themselves at school. She called her son "creative and a bit precocious," and said that, knowing his sense of humor, the letter was "hilarious." Nonetheless, she was curious about the "troubles" her son mentioned; when she asked him about them, he told her that his brother often beats him at video games.

Of course, there are merry stories that come out of asking students to write letters to Santa (though that doesn't change the fact that schools should be practicing inclusivity when they do make these assignments). When one first-grade class at Monte Cristo Elementary School in the southern Texas city of Edinburg was asked to write letters, a girl named Crystal Pacheco asked Santa for some food and a blanket for Christmas. Pacheco's teacher, Ruth Espiricueta, shared the letter on Facebook, saying it broke her heart and that she'd hoped to fulfill the wish.

"I never expected for students to ask for things we usually take for granted," Espiricueta, told ABC News. "I was heartbroken because no one should ever go hungry or be cold on winter nights."

At the time of writing this, the post was shared more than 500 times and had more than 1,000 likes and 150 comments. The letter inspired the principal at Monte Cristo Elementary School to start a donation drive, with a goal of collecting 724 blankets to give to each student — regardless of the religion they each practice, ABC News reported. A total of 616 have already been donated.

I hope that Jason's letter, like Pacheco's, gains the recognition it deserves. And maybe if, in 2018, guilty public schools resolved to stop forcing Jewish kids to talk to Santa, Jewish kids wouldn't be forced to spill the beans to all the believers.