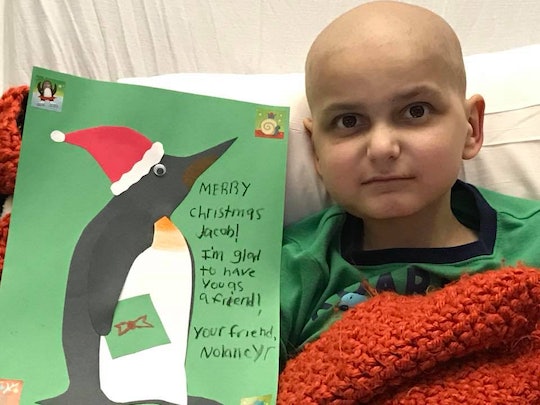 For His Last Christmas, This Boy Wants A Holiday Card From You

For many families, the holidays are supposed to be a time of love, joy, renewal, and happiness. But for one family in Maine, this holiday season is expected to bring heartbreak. A 9-year-old boy with terminal cancer is celebrating his last Christmas this year, and wants holiday cards from around the world to bring him and his family some cheer.

According to Good Housekeeping, Jacob Thompson is living with Stage 4 High Risk Neuroblastoma, a form of cancer that affects nerve tissue. The cancer had recently spread to his head and hip, and was resistant to radiation and oral pain medication treatment. Doctors admitted Thompson on Oct. 11 to Barbara Bush Children's Hospital in Portland, Maine, for the last time, Good Housekeeping reported; doctors said he has a month to live.

Thompson's mother, Michelle Thompson Simard, and his family have decided to help the 9-year-old boy celebrate Christmas early, and to do so, has asked the public to send in holiday cards. Thompson Simard wrote in Facebook post Wednesday that her son received his first card from his friend, Nolan, according to Fox News. A photo attached to the post showed a green construction paper card decorated with a penguin — Thompson's favorite animal, Fox News reported — with the message, "Merry Christmas, Jacob! I'm glad to have you as a friend!"

Thompson Simard told Good Housekeeping that "live like a penguin" is one of her son's motto. It means, according to Thompson's mother, to "be friendly, stand by each other, go the extra mile, jump into life and be cool."

More Christmas cards have arrived since Thompson received Nolan's creation this week. According to Simard's latest Facebook post on Friday, actor Rob Lowe, his co-stars, and the crew of CBS' medical drama Code Black sent a video to Jacob. Romper reached out to Lowe's publicist to confirm the news, but has yet to hear back. A copy of the video, though, has been shared on Twitter by Code Black's showrunner, Michael Seitzman.

Thompson's family has plans to turn the 9-year-old boy's hospital room into "a winter wonderland" next weekend, according to Good Housekeeping. His room will have snow, a tree, holiday decorations, and even Santa Claus. The North Pole transformation will help Thompson celebrate the season even though he is unable to leave his bed, and may soon pass away, his mother said.

Thompson Simard told Good Housekeeping of her holiday plans for her son,

Jacob loves the holiday season, and we want him to know that Christmas wishes come true and that there are good people who care all around the world.

Thompson's family had also set up a GoFundMe campaign on Oct. 16 to raise money for Jacob's funeral costs after learning he did not have long to live. Thompson Simard set the fundraising goal to $75,000; as of Friday, the family had raised nearly $54,000. Thompson's mother wrote on the GoFundMe page,

No one thinks about having to do this type of planning for their child and because of that we did nor do not have life insurance on him. We are asking for some assistance from family and friends to help support this.

According to their GoFundMe page, the response to Thompson's card request has been "great," and the family is "so excited" about the outpouring of love. Thompson Simard wrote in a GoFundMe update,

Thank you for the love and support! You guys are already blowing my mind with the response and comments!

Anyone wishing to send Thompson cards can send it to:

In addition to penguins and all things Christmas, Thompson also likes Star Wars, LEGOs, the video game Minecraft, singing, photography, watching movies, and watching videos by gaming YouTuber DanTDM, according to the Sacramento Bee. His favorite number is 32.

As a mother of a toddler son, I couldn't imagine what it must feel like to know my time with my baby is now limited. The Thompson family is showing incredible strength and love. I can only hope that this last Christmas is teeming with cheer, joy, laughter, and sweet memories.