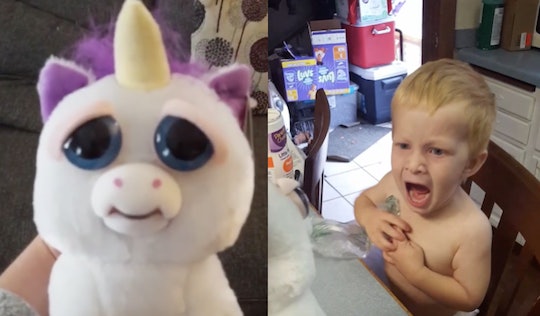 During the month of October, something makes everything — like pumpkins, friendly ghosts, and even innocent unicorn toys — seem a lot more scary. Yes, unicorn toys. Feisty Pets are a lovable, yet supposedly terrifying toy that your child will love — but you might want to brace them before you hand them their new plush friend. This is because this boy's reaction to what happened to his toy unicorn will make you cry, but only from laughing.

This video might make parents want to buy this toy, if only for how funny it will be to scare friends and your children (yes, it's OK to laugh at them every once in a while). Because if this boy's viral fame shows anything, it's that people love watching this kind of stuff.

On Tuesday, Facebook user Jessica Mags uploaded a video of her new unicorn Feisty Pet. The Feisty Pet appears innocent at first, but then turns evil almost by magic. It's like if a Sour Patch Kid candy came to life. In the video, Mags shows her son the pet in its cute form and he waves to it. But little does he know just how evil it really is.

His reaction, watching the stuffed toy changing from cute to mean, is exactly how I look when I'm watching President Donald Trump say something ridiculous on the nightly news.

But you shouldn't have to feel bad for laughing at the video. The boy's mom wrote in the Facebook post that her son is "fine" and not scarred for life (thank goodness). "He's asking to watch the video and is laughing at it," she wrote.

People seem to resonate with the boy's reaction, or just find it really hilarious. Since Mags posted the video, it has accumulated more than one million shares. Probably because they, too, have been in the little boy's shoes before — whether its from being scared by a spider, from watching an episode of American Horror Story, or from being the victim of a good old fashioned prank.

Whatever the case may be, it is clear that people are loving the video. I am, too. But recreating the events that place in the video is simple — although there is no guarantees as to what your child might do when the Feisty Pet turns mean. Feisty Pets are a stuffed toy with a pleasant look on their face, until you squeeze the back of their head and they turn mean — their eyebrows furl and their fangs show. The look upon their face would scare anyone.

But affording a Feisty Pet doesn't come at a cost. Feisty Pets are currently for sale on Amazon for $19.99. But to get the Feisty Pet used in the video might cost you. Glenda Glitterpoop the Unicorn (yes, that is her real name) used to scare the boy starts at more than $60 on Amazon. Because becoming viral, or just having something incredibly cute and terrifying at the same time, comes at a cost.

Feisty Pets might not be as entertaining as the current hot toy of the holidays, Fingerlings, or as rewarding as Hatchimals may be when they hatch. But Feisty Pets will keep you entertained if you scare enough people with one. Shoppers seem to agree; Amazon even has Feisty Pets listed as a top 100 toy for the holidays and let's be real — when has Amazon ever led you astray?

Nothing says the holidays like a little cuddly and terrifying toy to put underneath the tree to scare your children. If this video didn't convince you that you need one ASAP, then I don't know what will.