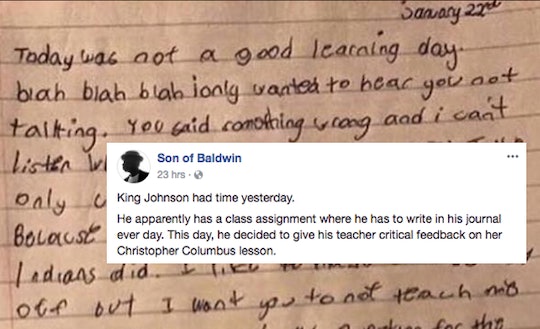 This Boy’s Sassy School Journal Entry Is Going Viral & Honestly, He Has A Point

Kids say the darndest things and also, sometimes, the wisest. Now, one boy's school journal entry about Christopher Columbus is going viral because it is both hilarious, and way more enlightened than anything else out there. Too bad his teacher couldn't keep up.

The photo making the rounds on Facebook shows an 8-year-old boy named King Johnson's school journal entry from Jan. 22. It seems that King's teacher was teaching the class that classic — and incorrect — bit of information that Columbus discovered America. (For a super-clear and informative explanation of everything that's wrong with that particular claim, check out the Adam Ruins Everything segment on Columbus.)

But King was not having it. In his journal, he wrote:

Today was not a good learning day. Blah, blah, blah. I only wanted to hear you not talking. You said something wrong and I can't listen when I hear lies. My mom said that the only Christofer we acknowledge is Wallace. Because Columbus didn't find our country, the Indians did. I like to have Columbus Day off, but I want you not to teach me lies. That is all. My question for the day is: How can white people teach black history?

Unfortunately, King's unnamed teacher didn't seem to appreciate his straight-forwardness (or his excellent Notorious B.I.G. reference), and wrote back, "King, I am very disappointed in your journal today."

And how did King respond? With a simple, and perfect, "Ok."

"I like to have Columbus Day off, but I want you not to teach me lies" should probably be the mission statement of 2018. Yes to holidays! No to lies that whitewash history and diminish the horrors of colonization!

People immediately seized on King's opinionated entry, and shared it far and wide. Many simply wanted to appreciate King's hilarious writing, but others were upset about the unnamed teacher's response, feeling that it was a missed opportunity to open up a dialogue about the excellent points that King raised, instead of stifling his opinion. But the internet works in mysterious ways. Because now, as it turns out, King has gotten some responses from other teachers who saw the viral journal entry and felt motivated to reach out in order to encourage his curiosity and honesty.

One such letter that King received, according to a screenshot on Instagram, begins:

Dear King, I’m sorry you felt today wasn’t a good learning day. As a teacher, I have some days that feel that way - frustrating. As a student, I’ve sat in many classrooms & heard that “blah blah blah” - teachers saying things that didn’t connect with me, that felt wrong to me. I think it’s great that you cared enough to call out your teacher when you thought you heard lies. I’d love to know what those things were. From your journal, it sounds like it was about Columbus. It sounds like your teacher was saying that Columbus discovered America? I think you’re right: I think s/he is behind the times. The modern view on Columbus is that he was an explorer, but we can’t credit him with “discovering” the New World. You’re right: Many, men tens & hundreds of thousands of indigenous people had been living here for thousands of years.

King's mother tells Romper that "he has always been outspoken and full of personality," but that this level of internet appreciation is "all new to us." Not to worry, though, if you find yourself needing more King inspiration in your life. He now has an Instagram (managed by his mother), and he has already started posting some adorable videos on it.

And as for how King feels about his newfound success (and also some not-so-kind responses from people calling him rude)? His mother told Romper that he had this to say:

I love all of the positive support and good things. I really wish people that have negative things to say would not judge me. It's wrong to call me rude. It's a bad thing to say to a child that you do not know. My journal is my thoughts and opinions. I'm a nice person. I was not expecting all this.