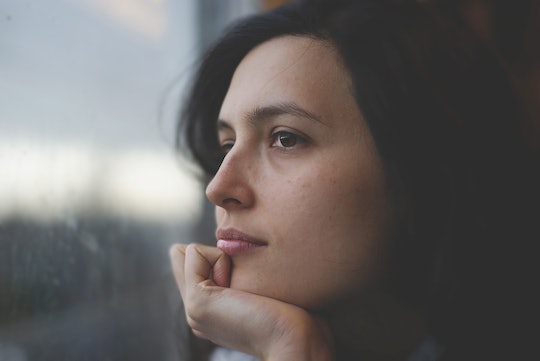 This Brain Chemical Could Increase The Chance Of Premature Birth

There are never any guarantees that a pregnancy will go full-term. Sometimes things happen that you can't control, and babies are born prematurely all the time. But there are certain risk factors you can avoid if you're pregnant and trying not to have a premature delivery. For example, there's a chemical reaction in the brain that could increase the chance of premature birth, and it involves something a lot of people deal with every day: stress.

According to the March of Dimes organization, high stress can increase the chances of having a premature baby, which is a baby born before 37 weeks of pregnancy. Some of the causes of stress during pregnancy include the normal discomforts of pregnancy — like backaches or nausea — and changing hormones, fears regarding the birth itself, or unexpected stressful events happening in your life during a pregnancy.

The reason why stress can impact whether a baby is born prematurely might have to do with the chemical reaction in the brain that occurs when someone is stressed.

According to an article in the Journal Sentinel from 2011, when someone is faced with a situation the body recognizes as being dangerous, a region of the brain called the hypothalamus sends out a chemical signal that instructs the body to produce cortisol, also known as the stress hormone. The Journal Sentinel reported that when a woman is chronically stressed, "cortisol binds to receptors on the placenta, which then put out more corticotropin-releasing hormone, or CRH." That hormone then goes back to the mother's brain, and a sort of positive feedback cycle is created.

The problem is, CRH is also a chemical that triggers labor once a certain threshold is reached, according the Journal Sentinel. And Calvin Hobel, an OB-GYN at Cedars-Sinai Medical Center in Los Angeles, told the Journal Sentinel that sometimes when that happens, "the fetus gets the signal that things aren't going well, so that initiates labor."

The Eunice Kennedy Shriver National Institute of Child Health and Human Development agreed that stress — or events that can lead to stress such as instances of domestic violence, including physical, sexual, or emotional abuse, or something rather ordinary but still stressful like working long hours with extended periods of standing — can lead to preterm labor and premature birth.

And sometimes, stress can be avoided. Some people are lucky that they can modify their work duties so they don't stress out their minds or bodies, for example.

But some stressful things can't be controlled, like a sudden death in the family, or unexpected abuse. You can't exactly stop a chemical reaction in your brain if your body thinks that you need it. So even though you can actively avoid some stress during pregnancy, and in turn avoid the chemical reaction involving CRH that can be triggered by stress, a mother shouldn't feel guilty if they deal with a stressful situation during pregnancy, especially one that is out of their control.

The connection between stress and premature birth is one very important reason why mothers need to have access to resources to leave stressful situations, such as abusive relationships. Or, if a woman knows a pregnancy could cause extreme, undue stress, or if they become pregnant with an abusive partner, women need to have the choice to have an abortion, and access to reproductive services including abortion. The choice to end a pregnancy could literally help keep a woman alive, and every women should have related options and resources available, just in case.

The best thing you can do if you're worried about stress or stressful situations when you're pregnant is to talk to your doctor. They should have ways to help you ease your stress level and continue a healthy pregnancy.