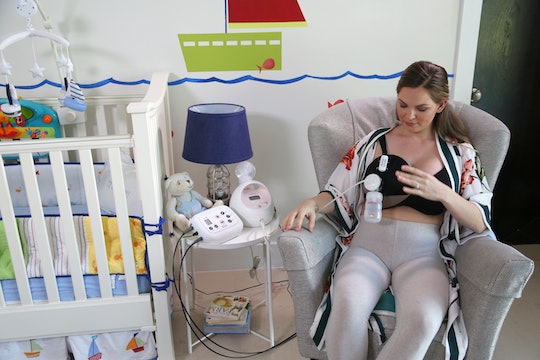 When you're a parent, life is filled with all kinds of necessary inconveniences — and breast pumps are definitely one of the most necessary and most inconvenient. There's no question that the devices have been revolutionary for working moms. But for something that's supposed to make life easier, having to deal with a breast pump can be a real drag. So it's no wonder a breast massaging system that recently debuted at the 2019 Consumer Electronics Show (CES) is getting so much buzz: Nurture by Imalac is the world's first hands-free breast massager, and it promises to make the pumping process significantly more efficient... though it's not technically a breast pump at all.

One of Babylist and The Baby Tech Summit's Fifteen Finalists for the 4th Annual Best of Baby Tech Awards at CES 2019, Nurture is meant to enhance your breast pump, not replace it. Because as every pumping mom knows, no matter how spectacularly top-of-the-line your current breast pump may be, you probably wish it would work just a little bit faster. There's just something so singularly soul-crushing about spending hours and hours of your life hooked up to a machine, especially when half the time you barely extrude enough in one session to fill a bottle. Nurture "provides gentle compression to replicate hands-on pumping," according to a press release, which "mimics the hand expression technique recommended by lactation consultants." When used as an accessory while pumping, Nurture has been shown to reduce the length of sessions by 72.3 percent, which is a pretty huge difference. This method also allows for full emptying of the breast, which correlates to as much as 32 percent more milk per session. In other words: More milk, faster.

That's partly because, as she explains, "a pump only sucks at your nipple. And the baby does so much else." Whether or not you realize it, when babies paw at you while nursing, their little hands are basically helping to massage the milk out.

With Nurture, Sablotsky says, she and her daughter/cofounder Rachael Kish want to bridge the gap between the breastfeeding experience and the breast pumping experience by making pumping faster, easier, and more intuitive. If you're taking a break to pump at work, for example, using Nurture means you might actually get to eat a sandwich at the same time. Imagine, eating lunch during your lunch break!

In addition to helping you maintain your productivity levels, Nurture can also help you to sidestep common breastfeeding pitfalls, explains Sablotsky.

"People get sore nipples and clogged milk ducts because they're not fully emptying their breasts," she says. These aren't new problems, of course, but for years, very little innovation existed in the world of breast pumps and related products. Now, thanks to more women moving into the world of technology, these problems are finally being addressed, says Sablotsky.

Still can't quite picture how this magical pumping gadget works? The complicated answer goes like this (as per the website):

Nurture by Imalac system features an attachable mechanism that applies circumferential pressure from the chest wall forward in a progressive motion designed to mimic hand expression.

The speed, pressure and hold time can be adjusted according to personal preferences via the built-in controller or Nurture by Imalac mobile app.

You've really got to see it in action to get it, though, so check out Nurture's Kickstarter video (their campaign has already exceeded its goal):

Nurture isn't just getting noticed through Kickstarter. Imalac got quite a lot of notice for its new product when the company held the “first ever live breast pumping event” at CES, as Fortune reported. The event featured participating moms from the Southern Nevada Breastfeeding Coalition (SNBC) all pumping live (with the help of Nurture, naturally). Let's just say that it's probably safe to assume there was a spike in searches on where to buy Nurture following the demo!

Unfortunately, you can't get your hands on one of these ingenious gadgets yet. Nurture will be available sometime in 2019, in a variety of sizes and colors, and will initially be sold directly from the website for $299.