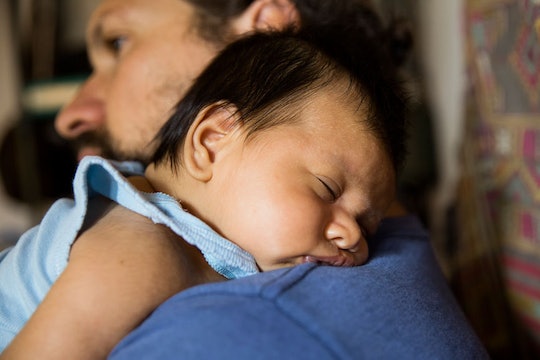 If somebody told you there was a new device coming out that allowed fathers to simulate breastfeeding, the first thing that came to your mind might be an image from Meet the Fockers (mostly because no one who saw that movie has ever been able to forget the sight of Robert DeNiro wearing that odd-looking contraption). But in a fascinating example of life imitating art, there really is a new breastfeeding device for dads coming out soon that could honestly be a game-changer... and it even syncs to your phone.

From the Japanese tech company Dentsu, the "Father's Nursing Assistant" recently debuted at the annual South By Southwest conference and festival, as The Bump reported. Described as "a technological nursing evolution" and "an infant breastfeeding and sleep inducement device for fathers" on the Dentsu website, the Father's Nursing Assistant has a "tank" for milk on one side and a "breastfeeding system" on the other, and it's modeled to resemble a mom’s breast in both look and feel. Plus, because dads can hold their babies with both arms when wearing the Assistant, there's more opportunity for cuddly skin-to-skin moments. As the website explains, the product design was "based on advice from pediatricians and babysitters, who say that babies tend to touch the breast with their hands when feeding and that the softness seems to soothe them." Dads, meanwhile, will dig the Assistant's high-tech features, which include the ability to track sleeping and feeding patterns.

So far, sounds like a far cry from this thing:

As Dentsu pointed out on their site, "much of the parental stress and difficulties surrounding child rearing are related to feeding and sleeping," and in Japan, the rate of participation by fathers in these areas is generally low. Dentsu hopes to help change that with the Father's Nursing Assistant, which might be more appealing to exclusively breastfed babies for midnight feedings than an unfamiliar bottle (of course, moms will still have to pump milk to use in it, though formula would work too).

A noble cause, to be sure. And it actually looks easy enough to use, at least in photos...

The Father's Nursing Assistant isn't yet available for sale, and there isn't a firm release date at the time of this writing, but it seems safe to say that there's a sizable consumer base waiting to give it a try. Unsurprisingly, another invention with the same purpose is also in the works right now, but it's significantly more invasive: Product design student Marie-Clarie Springham's "chestfeeding kit" for dads includes a supply of the hormone progestin, as Parents reported, which is a synthetic version of the female sex hormone progesterone that men would "begin taking once a day as soon as they learn their partner is expecting."

"This would stimulate the production of milk-producing glands," the article continued. "And then six weeks before baby arrives, dads would start taking another hormone called domperidone which stimulates prolactin, the hormone that triggers milk production."

The kit comes with other necessary dad-breastfeeding gear, including a pump and compression vest, and could be available for purchase in about five years.

I'd assume most people would be more comfortable using the Father's Nursing Assistant than anything involving synthetic hormones, though I suppose if you're going for an "authentic" breastfeeding experience, then hormones it is. Either way, it should be interesting to see if breastfeeding devices for dad ever really, really take off in popularity. Once again, that could truly be a game-changer.