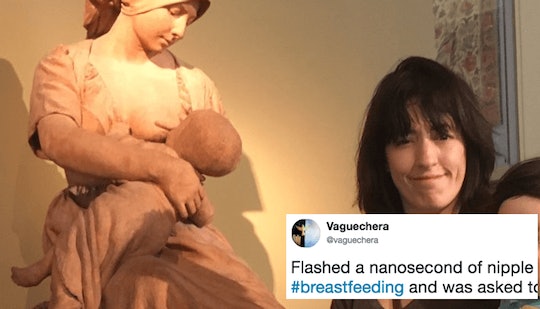 Breastfeeding is no easy task, despite how natural it might seem. Forget the logistics of trying to get a baby on the boob — dealing with wholly unnecessary shaming for daring to expose one's breast to feed her child can make the act of breastfeeding exceptionally difficult. When one breastfeeding mom was told to cover up at a museum, she pretty much had the best response an incredulous mama could have — and she tweeted it all out on Sunday at London's Victoria and Albert Museum. The mom has chosen to remain identified only by her Twitter handle, @vaguechera. The museum didn't immediately respond to Romper's request for comment, though it did publicly apologize.

"Flashed a nanosecond of nipple while #breastfeeding and was asked to cover up in @V_and_A courtyard," the mom tweeted. "Am perplexed..." Accompanying her tweet was a photo collage of female statues with exposed breasts found throughout the museum, while proudly holding up her 3-and-a-half-year-old son next to one. Vaguechera continued her tour of the museum, pointing out just about all of the exposed breasts she encountered throughout the museum's art collection — and each tweet contained a photo with a savagely hilarious caption documenting the absurdity of her plight.

For once, the middle school giggle fest that is "OMG boobs" seems an entirely appropriate tactic in this context.

In another tweet, Vaguechera mentioned that she was "so surprised" by the museum staff member's request because it was the first time she'd ever been asked to cover up in the three and a half years she had been breastfeeding. That's not to say she couldn't turn the situation into a teachable moment for both her son and the museum — and the rest of the world, for that matter — through her amazing captions accompanying classic works of bare-breasted art.

The mom told the BBC why she felt it was important to take the issue to social media — as amazing as her captions were, the problem is part of something more serious for mothers. She said, "The shame and embarrassment caused by that kind of interjection when you are trying to feed could be crushing for a woman who was less Teflon than me. ... It could really badly affect someone's attempt to breastfeed if they were struggling with their confidence."

To its credit, the Victoria and Albert Museum apologized to the mom via Twitter within just a few hours of her first tweet, while reiterating the museum's policy about breastfeeding.

Even the museum's director, Tristam Hunt, offered his own personal apology to the mom via Twitter as well.

There are many, many things to celebrate about this mom's ability to call out this instance of breastfeeding shaming — but that it had to happen at all still shows that society has a long way to go when it comes to getting over public discomfort caused by a woman trying to feed her child — and feeling the need to insert those opinions while she does.