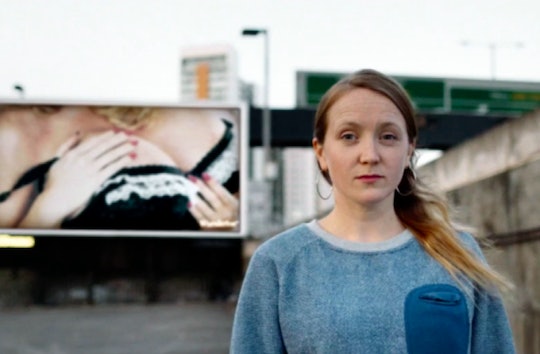 Even in 2016, it still remains a mystery that breastfeeding in public can make people so incredibly squeamish that women are forced to cover up or even go to a public bathroom stall to do one of the most natural and nutritious things a mother can do for her baby. Yet, the topic remains quite heated and controversial. But, this breastfeeding short film might possibly put an end to a simply perplexing debate. The poem entitled Embarrassed powerfully exposes how ridiculously hypocritical our society has become and impressively captures the shame breastfeeding mothers battle with daily.

English poet Hollie McNish's four-minute video perfectly sums up the shame moms face when nursing in public and are asked to breastfeed in a bathroom stall, while sharing what she's experienced when feeding her daughter in public.

"I thought it was okay, I could understand the reasons. They said, 'There might be a man or a nervous child seeing this small piece of flesh that they weren’t quite expecting.'" McNish says in the poem. "So I whispered and tip-toed with nervous discretion. But after six months of her life sat sitting on lids, sipping on milk, nostrils sniffing on piss, trying not to bang her head on toilet roll dispensers, I wonder whether these public loo feeds offend her."

The spoken word artist continues to vocalize everything that's wrong with our society's perception of breastfeeding and breast culture. She explains that, in general, people are comfortable and even favor "tits" in sexualized billboards and in the media, but are disgusted and offended by a "small piece of flesh." She asks, "Why is titillation accepted and sustenance rejected?"

In a "country of low-cut tops, cleavage and skin," she wonders why she and breastfeeding mothers should feel "embarrassed in case a small flash of flesh might offend."

Towards the end of the poem, which has been viewed more than 6 million times since Monday, she addresses some larger and more complex issues, such as how formula companies, or the "milk-makers" profit from the stigma and how there's a disconnect, unless mothers need or prefer bottles, that "we’re now paying for one thing that’s always been free."

Ultimately, she concludes the poem, if our culture is comfortable enough with cleavage plastered on billboards and magazine covers then she won’t succumb to society’s pressure to hide away when she’s simply just feeding her child. And the rest of the world should get on board.

"So no more will I sit on these cold toilet lids. No matter how embarrassed I feel as she sips," she proclaims. "Because in this country of billboards, covered in tits. I think we should try to get used to this."