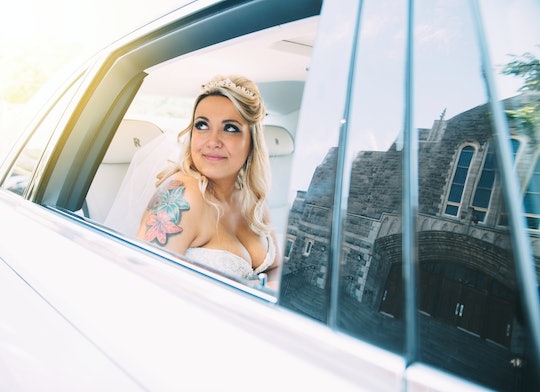 This Bride Openly Breastfed At Her Wedding, & The Pictures Are Gorgeous

You're 15 minutes into your wedding ceremony when, suddenly, your 9-month-old baby begins to cry in the audience. Quick — what do you do? If you're bride Christina Torino-Benton, you breastfeed your baby until she falls back asleep. You then become the awesome bride whose breastfeeding wedding pictures have taken over the internet, becoming a positive champion for widely shamed breastfeeding mothers everywhere.

"It felt pretty normal, nothing too out of the usual for me, except for I was wearing a 50-pound dress," Torino-Benton told Today on Monday. "I was very fortunate I was able to maneuver myself out of it without too much struggle."

The ceremony, which took place on June 18 in Montreal, included an hour-long Roman Catholic mass. Fifteen minutes in, Gemma — who was being cradled by her grandmother — began to cry. Torino-Benton knew she couldn't ignore her daughter, and told her soon-to-be husband, Danny, "This is going down right now."

So, scooping Gemma out of her grandma's arms, Torino-Benton breastfed her baby just before she got married. "The plan was she would be happy in my mom's arms for an hour, but it didn't work out that way," Torino-Benton told Today. "Right after I took her, everything was back to being amazing."

Once photographer Lana Nimmons sent Torino-Benton the pictures of her ceremony, the newlywed shared the breastfeeding wedding shots with a breastfeeding Facebook group, writing, "That moment when you're getting married and your baby gets hungry. Feeling SO proud of myself! Fighting that good fight!" It sparked a thread of similar comments and beautiful pictures from other mothers breastfeeding on their wedding days.

When I first had Gemma, I would find a room in the back somewhere and just quietly nurse her in a chair or if someone were to walk in, I'd turn around. I was very nervous and shy at first. Then I realized that taking care of her needs is way more important than possibly offending anyone else.

The picture shared by Torino-Benton on Facebook has since gone viral, and many mothers have weighed in to thank her for the beautiful breastfeeding shot. "I just want to say thank you to all of you ladies that shared memories and photos of this," wrote Amelia Ann last week, explaining that she'd been considering quitting breastfeeding for her child. "Its just so worth it for me to keep going. So thank you all from one mama to another. I needed that small push to keep at this."

The positive response has been encouraging for both Torino-Benton and others. "If I could breastfeed in a Catholic church during a wedding, maybe other women will feel more comfortable to do the same just about anywhere," Torino-Benton told Self. And with such a positive, viral response, maybe more women will realize that public breastfeeding is nothing to be worried about — and that stopping, dropping, and breastfeeding might even become a funny, beautiful memory on your special day.