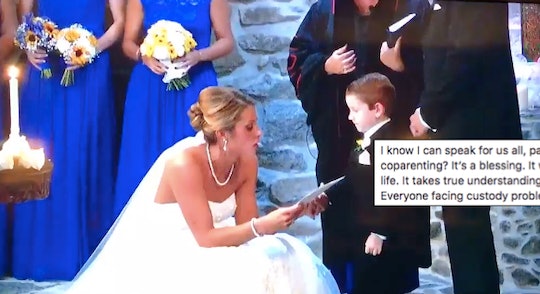 Blended families are one of a kind. But they say when you marry someone, you're marrying every part about them and that can not be more true. All of the parts — from their (at times) overbearing parents to their children, if they have them — become a part of you. So it is no surprise that more brides are reading vows to their stepchildren at their weddings. And this bride's vows to his stepson and his mother will have you in tears from the beauty of it all.

When it comes to marrying and dating someone with children, there very well could be more than one person involved — the mother or father of the child. Yes, co-parenting can be hard and movies love to adopt the stereotype of the "evil stepmother" or the "bitter birth mom," but this isn't always the case. Sometimes the forces combine for good, rather than pitting themselves against one another.

Take Katie Musser, for example. When the Pennsylvania woman found out that the man she was dating, Jeremy Musser, had a newborn son, things "started off rocky" between Musser and the son's mom, Casey Bender, according to People. But, as time would allow it, the two women ended up becoming close. And when it came time to write her vows for their wedding, Musser ended up including both Bender, and her new stepson, Landon, in the vows.

In a Facebook post — which has since garnered attention in the week since she posted it, including a video that's gotten more than 55,000 views — Musser detailed her decision to include both Landon and his mom in the vows.

Weeks and weeks I went back and forth about doing this, but why did I question myself? Because I was afraid of what people thought? That it wasn't the norm? What are the questions I will get? But I finally realized, yes Jeremy and I were going to be a family...our own family, but I felt like I was missing something. And that was Casey and Tyler in the mix. If it wasn't for them, I know Jeremy and I would not have been together. They are the reason we grew up and love like we do.

The most important vow Musser wanted to make to Landon and Bender? A promise that they would be one family, always. You can see all of the promises that Musser vowed to make to her new stepson and his mother in a now viral video that she shared in the Facebook post:

In the vows that Musser made to Bender, according to ABC News, Musser vowed to be an "amazing mother" to her Landon, promising to "guide, teach, and love him every single day."

Bender told People that having Musser read vows to her during her wedding was a little unexpected:

My reaction was complete and utter shock. I was blindsided by the whole thing, but looking back, Katie is that type of person. She loves to love and shows it to you by any means necessary.

Blended families like these are incredibly common, although according to a 2015 Pew Social Trend report on parenting, the amount of children living in a two-parent household is at its lowest point now, with 62 percent of children living with two married parents. And like Musser respecting Landon and Bender's relationship, the American Psychological Association recommends that in order to make a stepfamily work, building a strong bond with the child and making big communications parent-to-parent rather than parent-to-child, is vital. Vows like these are only an example of that.

Having a successful blended family could be why these new mothers are going ahead and reciting vows to their stepchildren. In July, another woman's story went viral after she surprised her 4-year-old stepson at her wedding and read vows meant just for him. His reaction led to him breaking down in tears, proving that the kids appreciate this heartfelt message just as much as the parents do.

Making the decision to become a stepmother, create a blended family, and become a coparent is a huge decision to make. But rest assured, after listening to Musser's vows, she is more than ready and excited for what's in store.