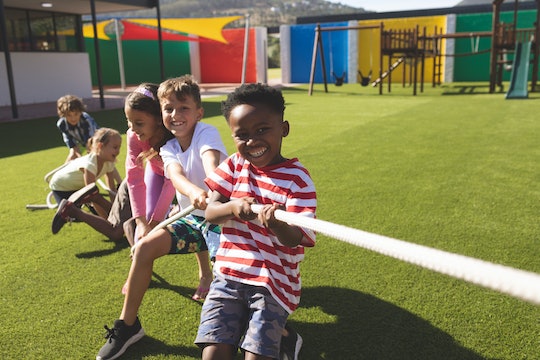 This School Is Changing The Way Homeless Youth Are Educated

Addressing the systematic problems facing homeless youth and families is no small task. Though the reasons that young children might end up homeless can vary, the resources to help them are often aimed at caring for their most basic needs. While those needs are undoubtedly essential, this California school for homeless youth is supporting them with a curriculum that will help them thrive post-grad.

You might be under the assumption that homelessness is something that doesn't impact many kids, but the numbers paint a very different picture. The National Institute for Research reports that 2.5 million children in the U.S. are homeless, and as of 2014, that accounted for 1 out of every 30 children. That is a pretty significant number considering that it would be the equivalent of one student out of every average-sized elementary school class.

When we think about it in those terms, it seems even more inspiring that institutions such as the Mustard Seed School exist. Based in California, the school provides a space in which homeless children are not encouraged to just get by, but to hone in on their individuals gifts and skills to truly become productive, contributing members of society after graduation.

According to their official site, the school provides "a safe, nurturing and structured environment, a positive learning experience, happy memories, survival resources of food, clothing and shelter referrals, medical and dental screenings, immunization updates, counseling for children and their parents, and assistance entering or reentering public schools."

They explain that many school aged children who might not be attending due to homelessness or lack of supplies are still "eager to learn."

Ultimately, the Mustard Seed School's goal is to prepare children to be enrolled or re-enrolled into the public school system so that they can complete their education.

According to Sacramento News, the school was established in 1989, and has since educated about 6,000 children, which equates to about 200 per year. However, in 2015, SacBee.com reported that there was a significant influx in enrollment, which became a topic of concern for some community members.

Lucia Vega, the school's outreach coordinator who was formerly homeless herself, says that their approach is holistic. Upon entry, the family is connected to multiple resources that will assist their needs, including "housing, clothing, counseling and medical services," Sacramento News also reported.

We provide transportation, so we pick kids up every morning from motels or light-rail stations or on the street and bring them to school and we drop them off. If kids need glasses, we make eye appointments. We have a dentist that we work with. We can take two kids per month on an emergency basis. We make sure they have food. If they need clothes, we get them clothes. Whatever the family needs.

The reality is that with homelessness and poverty being such a pervasive issue in the United States, it is pertinent that institutions such as the Mustard Seed School exist in order to help kids not only get by, but truly thrive and live out the fullness of their potential.

Editor's Note: This article has been updated to reflect the correct website address and video embeds for the Mustard Seed School, a program of Loaves & Fishes.