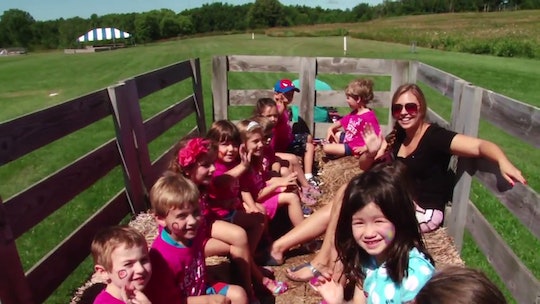 This Camp Just For Trans Kids Is An Amazing Step Forward

Many adults have fond memories of summer camp — s'mores, silly songs, and perhaps most importantly, a chance to forget about the challenges of the school year and just have fun with people who accept you. Now, a Bay Area camp for transgender kids is bringing that particular type of acceptance to those who need it most. And with openings for children as young as 4 years old, Rainbow Day Camp shows that it's never too early for kids to love themselves for who they are.

In today's political climate, where politicians argue over bathroom laws nonstop and cruel tweets about the military's policy on transgender service members put the future of brave men and women up in the air, it's refreshing to read an Associated Press report about the success of Rainbow Day Camp, which bills itself as a "summer day camp for gender nonbinary and transgender youth." At Rainbow Day Camp, kids between the ages of 4 and 12 come to a safe place where, each morning, they can choose which pronoun goes on their name tag. Throughout the day, a therapist is on hand in case kids want to talk about what they're going through at a place where most of the counselors are transgender people who help show questioning kids that they're not alone.

Beyond that, it's basically a camp like any other. Children play games like capture the flag and soccer, do art projects, and learn different types of dance, according to the camp's website.

It's clear from the AP report just how wonderful the camp has been for many families. One camper, 6-year-old Gracie Maxwell, was born a boy, but insisted from the time she could talk that she was a girl. While she and her family struggled for some years, her parents eventually let her begin presenting as her chosen gender. In the photos of Gracie at summer camp, she beams. Gracie's mother, Molly Maxwell, told the AP:

I see her now, compared to before. I watch her strut around and dance and sing and the way she talks about herself. If she was forced to be someone else... I don’t even want to think about that.

And another child, Scarlett Reinhold, told the AP: “I feel comfortable for being who I am and who I want to be" at camp.

The 3-year-old camp currently enrolls around 60 children, and kids come from all over the country (and even a few other countries!) to participate. Next summer, according to the AP, the California camp plans to open up a Colorado location, too.

As awareness of LGBTQ issues grows, more and more children are realizing that they are transgender or gender-fluid at younger ages. But transgender kids still face many challenges as they grow up — from rejection by family and friends to transphobia in the society around them. What's more, the rate of attempted suicide is much higher for transgender youth than it is for cisgender youth.

Thankfully, at Rainbow Day Camp, it's clear that these kids are met with nothing but acceptance and love. And, of course, silly camp songs.