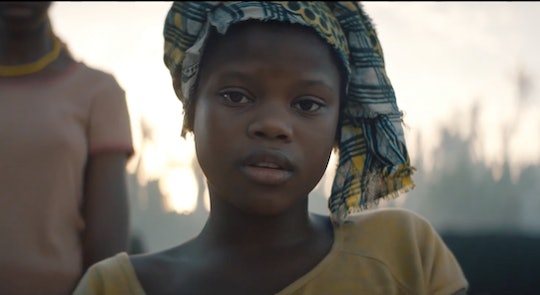 When you live a more privileged life, it can sometimes be hard to remember that the oppression of different groups of people is still a significant issue all around the world (including in the United States). But what's often lost in the discussion of underprivileged groups is the mistreatment of children, which is still a very pertinent issue globally. That's why this campaign to end children's oppression worldwide will move you to tears, remind you just how far we have to go, and encourage you to get to work.

Created by the nonprofit group Right to Play, which according to AdWeek, provides "educational programs in 15 countries to foster the protection, education and empowerment of young people." The group made the video for Canada's International Children's Day celebration (also known as Universal Children's Day), which takes place on Nov. 20.

The group also teaches underprivileged kids about hygiene, health, and safety. “We do a lot work on psycho-social support in refugee camps using play-based techniques to help children deal with the trauma of war that they have experienced,” CEO Kevin Frey told AdWeek. One such example of their work is teaching kids "Mosquito Tag" in areas that are prone to malaria outbreaks. In the game, the children have to run away from the kids who are "mosquitos," and they have to use a protective net over their heads. The point is to better understand how the infection is spread, and what to do as a preventative measure.

However, this particular campaign video is more about the treatment that children should not have to tolerate from adults.

The video opens with a montage of kids in different countries. Some are holding machine guns, others are posing in their wedding dresses as child brides, and others are shown in the blur of a sweatshop, emerging as a narrator recites the following: “They think they can traffic us, abuse us, marry us, and use us. They think that our futures are their own to shape … but we’ll rise above the fear and the hurt and pain.”

The organization explains on its website that it serves 1.9 million children each week, and its primary goals are to keep girls safe, ensure girls have a voice, reduce unwanted sex, build peaceful communities, prevent HIV, and encourage young women to lead, among other initiatives.

"We bring the power of play to 15 countries, each with their own set of challenges for children. In these countries, we empower girls to resist early marriage and to continue their education," the organization explains on its site. "We teach children how to protect themselves from diseases like HIV and malaria. We help child laborers return to school. And we inspire refugee youth living in dire camp conditions to heal and succeed."

Be all of that as it is, it's inspiring and empowering to give kids a voice, as they are so profoundly mistreated in many parts of the world. Sure, part of the problem is inaccessible healthcare and other issues, but it's also adults that want to capitalize on the voicelessness of children, employing them as slaves, using them as wives and child-bearers without their consent, and initiating them into being soldiers in someone else's war.

The truth is that these problems will not be solved overnight, but with organizations like Right to Play making such significant strides and the powerful messaging released this week, it's clear that the world is on its way.