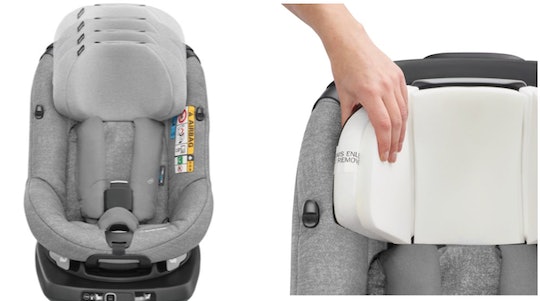 The United Kingdom is trying out an invention that, if successful, might help keep families safer all over the globe. The world's first-ever car seat with built-in airbags went on sale today across the pond, and people are hopeful about this forward-thinking technology that could potentially provide parents with an option that'll keep their kids even more protected.

So first thing's first: how does it actually work? According to The Daily Mail, the product is able to "[detect] a collision in 0.05 seconds and instantly inflates bags in the shoulder pads of the harness." By having the airbags at shoulder-height, toddlers' heads and necks are better supported. All of this is designed in efforts to prevent toddlers' necks from "snapping forward" and causing irreparable damage.

Apparently, these built-in airbags cut the so-called "jerking forces" caused by a car crash in half, the outlet reported. More neck stability will likely yield fewer fatalities in car accidents, given that such vulnerable areas will be more supported.

Popular car seat manufacturer Maxi Cosi developed the new, innovative product. At present, the car seats are designed for children from 4 months to 4 years old, and for $730, so you'd certainly hope that they would last at least that long. The first Maxi Cosi product to feature the bags is called the AxissFix Air, which can face forward, backward, and can also be placed in the passenger seat.

Maxi Cosi's "Air Technology" is to thank for the new airbag development, according to Tires & Parts, and the technology is pretty amazing. The seats have acceleration sensors in them that are connected to CO2 air cartridges which inflate the air bags, automatically deflating one second later. The video above, shared by The Daily Mail, demonstrates how they work, emphasizing how the impact appears to lessen with Air Technology-enabled car seats.

Andrew Ratcliffe, the current managing director of Maxi Cosi, explained the company's logic behind helping to develop the car seat, insisting that "child safety is mostly dependent on car seat legislation," while urging that "real [safety] innovations need to come from [within the] industry," according to PR Newswire. Maxi Cosi thusly worked "to develop a new standard" in car seats with the help of "Helite, a French company specialized in mobile airbag technology," according to the press release. To put it simply, according to AOL, Ratcliffe explained:

Our Maxi Cosi Air Safety technology will lower the impact of an accident to a child's neck and head in a forward-facing child car seat, resulting in better safety for toddlers.

The company pulled from other “successful applications in airbag technology" for inspiration, including "airbag jackets for motorcyclists and airbag seatbelts in aircraft that inflate during a collision," Ratcliffe shared, according to AOL.

Romper has reached out to the Academy of American Pediatrics (AAP) and the National Highway Traffic Safety Administration (NHTSA) for comment on the new car seats' safety features.

Advancements in car seat technology are vital as motor vehicle injuries remain a leading cause of death for American children, the Centers for Disease Control and Prevention (CDC) notes. "One in 3 children who die in a motor vehicle collision are unrestrained," the AAP also notes. Utilizing car seats reduces the risk of death for infants by 71 percent and toddlers by 54 percent. And according to the NHTSA, 248 children under age 5 were saved by car seats in 2015.

Maxi Cosi's product hasn't expanded to minivans everywhere quite yet, but it's possible that they'll become the new normal. Parents able to spend the extra money on top-of-the-line, luxury car seats would just as well spring for high-tech safety features in addition to sleek style. As of now, your run-of-the-mill seat will suffice, but don't be surprised if seats in the future start sporting extra trimmings, trappings, and self-inflating airbags.