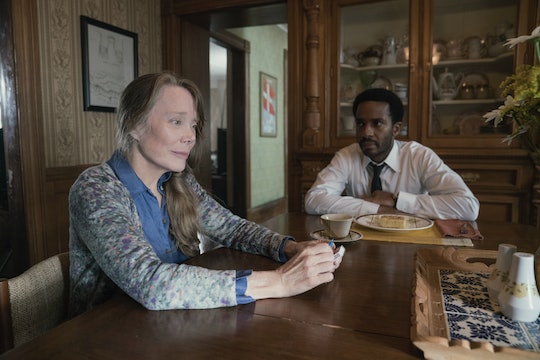 It seems like every Castle Rock resident has a secret to hide, and after seeing Ruth Deaver (Sissy Spacek) fall in and out of her memories, some fans are speculating that she may have some supernatural abilities up her sleeve. Because the show was inspired by the paranormal world of Stephen King, fans are using his work to theorize the origins of The Kid (Bill Skarsgård) and Henry Deaver (Andre Holland). But personally, I think Mama Deaver holds the key to the mysteries in town, and I think this Castle Rock theory about Ruth will make your head spin.

The theory is that Ruth Deaver is actually travelling through time, and while it has been all over the Castle Rock Reddit boards, it came from Redditor Yes_that_Carl early in the season. The user theorized that Ruth may not really be ill, but that she was just suffering from time slips as a result of her time travel. The Redditor posted the theory in a thread about the use of time travel on the show, in which some users pointed out the use of time travel throughout executive producer JJ Abrams' past projects. “Having watched Lost for years, I can testify that JJ Abrams isn’t scared of using time travel as a plot device AT ALL,” wrote Reddit user SpiritPaintedSin. “Dude will have his characters time travel forwards, backwards, sideways, diagonal, every which way someone possibly can.”

But aside from Abrams' time travel usage in the past, it’s important to remember that the show is inspired by supernatural places, characters, and events from King’s books — which are full of time travel as well. For example, the novel 11/22/63 was about a man who kept traveling back in time to stop the assassination of JFK. The book was eventually adapted as a series for Hulu which was also spearheaded by Abrams.

There have also been a few hints on the show that may point to a time-travel-related ability for Ruth. Reddit user tommygilbreath pointed to the dialogue from Episode 6, when The Kid tries to explain Ruth’s condition to Alan Pangborn (Scott Glenn) when telling him that “Time is her enemy.” The Redditor theorized, “While the audience/Sheriff took that to mean 'she doesn't have much time left,' I think it will turn out to be more literal than that. Like as in, maybe she is in some sort of war with time in a way.” The user continued, “I also suspect that she is faking her Alzheimer's/Sundowners. She knows she is bouncing around in time, and uses the disease as an excuse to explain her behavior.”

Another indicator of time travel is the Episode 7 scene in which Pangborn first returns to Ruth’s home to reconnect with her after 14 years, shown right after Ruth mistakenly shoots Pangborn. But in Episode 5, Pangborn described that exact visit to Henry saying that he received a call because “somebody heard gunfire up at your mom’s place” and that she answered the door “looking like she’d been to hell and back, threw her arms around me, begged me ‘Don’t leave’.”

Some Redditors have questioned Pangborn’s own future shooting as the catalyst for his visit to her in the past. “Okay so he originally came back to the house because someone called about gunfire, but there was no gun was fired until in the future so does that mean there is some legitimate time travel element?” asked Reddit user JudgeHoIden. If Ruth is in a time loop, or time traveling in some way, it could explain all the odd things she saw in her memories. She saw an older and younger version of herself looking at her and she also saw her dog Puck helping her dig up his own body.

Whether you believe that Ruth is really time-traveling, or if the events shown are just how she experiences her own dementia, you can be sure that the end to this show is going to be completely chilling.