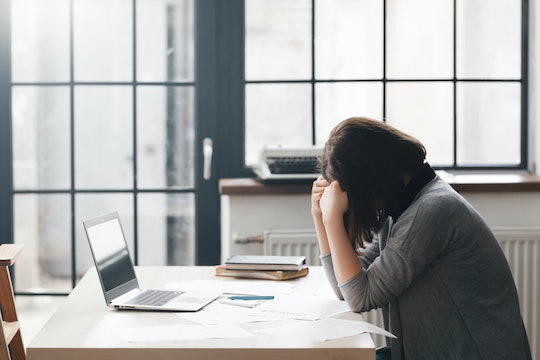 There's a lot of talk about the need for companies to offer parental leave, but what about parents' time off after their child is born? In case no one has told you, little kids get sick a lot and this CEO's story about a mom crying at her desk is evidence that the pressure to be at work instead of at home with sick children is real. The need for leave doesn't stop once the baby is born — sometimes that need is even greater. Conflicting pressures can take their toll on parents and empathy from employees is more important than ever.

I was blessed with a very easy pregnancy and a short recovery. And, working from home, I was able to return to work a lot more quickly than many of my mom friends because I could type and snuggle at the same time. But a little bit down the line in my parenting journey, I learned just how often little ones get sick — and how often I was going to have to call out of work.

Kids younger than 6 years old get the common cold anywhere from six to eight times a year, according to Vox; not to mention all of the other gross bugs they can pickup from daycare, playdates, and sticking any and everything in their mouths. And when they get sick, kids tend to want their parents around. But that's not always possible, due to limits on sick time and demanding work schedules — something one CEO saw firsthand and decided to do something about.

Bernie Reifkind, CEO and Managing Principal of the healthcare recruiting and talent acquisition company Premier Search, took to LinkedIn to share an interaction he had with a hardworking mom who was "burning the candle at both ends." After a long night up with a sick child, and with bags under her eyes, she came in to work anyway because she was out of sick days and "could not afford to miss another day." From there, as Reifkind shared on LinkedIn, he took it on himself to make her life a little easier.

"I sent her home and promised that she would get paid. In addition, I wrote her a check on the spot for extra money to alleviate her immediate financial worry," he wrote. "She was incredibly grateful. To this day, she is my best employee not just because of her talent but her loyalty."

Reifkind turned his post into a call to action for other employers to "please understand that most people are carrying the weight of the world on their shoulders." People's lives don't begin and end at their workplace. Instead, many are "burning the candle at both ends. Trying to make ends meet. Kids, homework, spouses, significant others, elder parents, mortgage payments, auto repairs, etc."

Employers should try to keep in mind that parents are putting in work at home both before and after they clock in at the office. To put things in perspective, the average working mother spends about 100 hours a week on labor between paid and unpaid duties, according to a study conducted by Welch's Grape Juice. The "second shift" working parents put in at home should not be understated.

As Reifkind pointed out, the "relentlessness of life" can get to them. And that's where employers can ease that pressure. "People are worried about their jobs," he wrote. "PLEASE reassure your hard working employees that their jobs are secure, whenever possible. Loyalty goes both ways."

Suffice it to say that Reifkind's followers related to his message. The post has since gone viral, racking up almost 70,000 shares and more than 2,000 comments, many of which were posted by parents. Additionally, he told Romper that his post has since gotten over 3 million views. "Very well said and done," one person wrote. "Too many companies seem to have forgotten that we are all human with the same troubles and cares..." Too true.

Speaking with Romper, Reifkind describes the exchange with his employee as "an act of compassion and kindness." "I would’ve hoped someone would do that for me," he says. As a working dad in a dual-earning family, he and his wife know a thing or two about sick days — and those long, long nights — with little ones.

"I'm a very participatory dad ... My wife and I, we've been there. I know what those nights are like. When your kids are sick, as a parent you have to just buck up and just go with it to care for your children," he says. "And I'd just like to shout out to working dads — and moms, but mostly dads like myself who are truly involved in everything — because it really does take a team to raise kids."

While this post only represents one instance of a boss seeing a parent as a person as well as an employee, hopefully the viral nature of Reifkind's message will inspire more companies to manage with compassion.