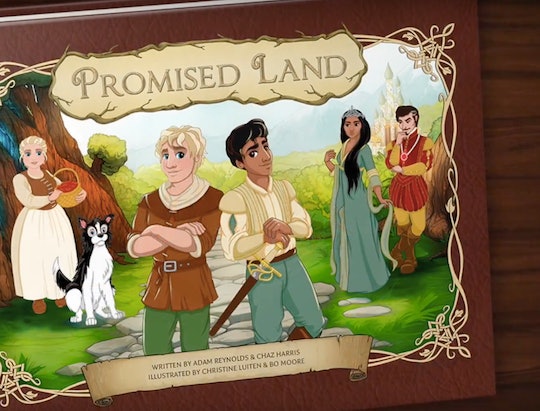 This Book Is A Huge Step For LGBTQ Kids

Boy meets Boy isn't a summary people hear very often when it comes to books for kids. But in a new children's book about a farm boy meeting a prince, that's exactly what happens. Promised Land, a new children's book, has a beautiful, hard-to-find message that's a huge step forward when it comes to representing every type of relationship and love for children, who often grow up in a world that tells them that straight love is the only true "normal."

According to the Huffington Post, Promised Land, by authors Adam Reynolds and Chaz Harris, "borrows elements from classic fairy tales and utilizes them in a queer and empowering framework." The book is reportedly set in a kingdom where everyone is equal, no matter how they look or who they love, and frankly, that sounds like a wonderful place, and a world many kids could easily get lost in in their imaginations.

On the official website for Promised Land, it's stated that the book is an illustrated children’s book, and features 32 full color illustrations by Christine Luiten and Bo Moore. So far it sounds like this book is empowering, entertaining, and very colorful (sign me up for a copy!).

There are other important characters besides the farm boy and the prince in the book as well. The website states that in Promised Land, there's also a Queen, but when she re-marries, her new husband wants to control the Enchanted Forest and the land the farm boy's family protects — which I'll guess probably leads to trouble for the farm boy. Uh oh.

The new book is no doubt a groundbreaking effort, and one of the authors, Chaz Harris, recently wrote for The Spinoff website about what it was like for him to grow up without LGBTQ role models in media and books. He wrote:

I related to these characters, but I realise now I was projecting my own identity onto them and the struggle to find their place in the world. A question soon grew in my mind: if I’m gay and that’s meant to be okay, then why are none of these characters like me?

So Harris and fellow author Adam Reynolds set out to create characters kids that LGBTQ kids who might be like Harris could relate to. He wrote in The Spinoff:

... having waited my whole life to see representation like this and in disbelief it still didn’t exist, I locked onto it like my life depended on it. Even though it didn’t, I knew for others, that might be the case.

The effort was clearly important to Harris and Reynolds, and it's certainly going to be important for children as well. The Huffington Post reported that, not only does the book present a same-sex love story in an accessible way, but it also includes a storyline that lets the aforementioned Queen avoid the “damsel in distress” narrative by having her be the one to save herself instead. LGBTQ-inclusive and feminist! OK, sign me up for multiple copies to give out to all my friends with kids.

So how does one go about getting a copy of this great new book anyway? It sounds like Promised Land is already sold out in hard cover form, but it is available to pre-order in paperback, or as a digital download as an e-book from the official website.

It appears the book is pretty popular already, so its' inclusive nature must be appealing to a lot of parents. And the authors definitely recognize the magnitude of a book such as this.

Scary Mommy reported that the authors chose to dedicate the book to the 49 individuals killed at the Pulse nightclub shooting in Florida, many of whom were LGBTQ. Harris explained:

We felt it was important that the lives that we lost could be forever remembered with a message of love and hope.

Love and hope sounds like the central theme of this wonderful new work of literature. With it's publication, a whole new generation of kids can be introduced to "a brand new fairytale about friendship, responsibility, adventure and love."