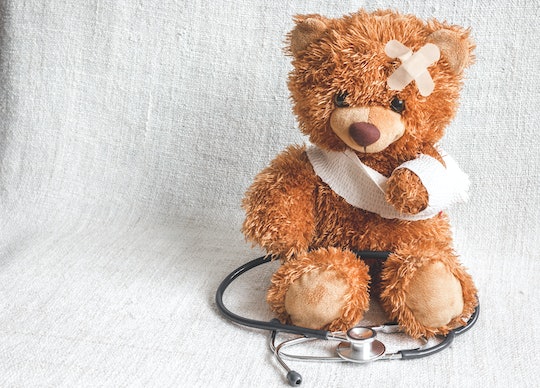 In the most adorable news to hit the internet this week, the Children’s Museum of Manhattan (CMOM) has announced that it's offering help for all the bears, giraffes and dinosaurs out there — yes, I said dinosaurs. These are the stuffed kind, the ones you can’t get away from your child to throw in the wash, and CMOM wants to help kiddos keep them in top form while also connecting kids with the arts. It’s called the Children’s Stuffed Animal Repair program and it is melting collective hearts.

Anyone who's had a beloved stuffed friend knows what a beating those magical companions can take. According to a press release, CMOM has invited kids and parents to come by between July 31 and Aug. 5, between 10 a.m. and 5 p.m. to get all the little tears and holes filled up and stitched up. Through the process, kids will safely learn some basic techniques, including sewing and stuffing.

Admission to the museum is $14 for adults and kids, or free for kids under 12 months and members. All programs are free with admission. The program is just one element of a larger exhibit called Art, Artists & You, which runs through the second half of 2018 and is designed to connect kids with the arts.

On CMOM’s website, it states that the goal of the exhibit is “encouraging children and their families to explore self-expression and identity through art-making.” In pursuit of that, four artists in residence are spending time in-studio at the museum, working on projects using a variety of mediums.

CMOM isn’t the first museum to offer such a program, though it may be the first in the New York City area. The Children’s Museum of Pittsburgh held a similar event in October 2017 called its Stuffed Animal Hospital. A quick web search also shows that there are kind-hearted people out there perfectly willing to sew up a child's (or even an adult's) beloved stuffed toy, for a small fee, of course.

A woman only identified as Daisy wrote about her experience sending her beloved stuffed lamb in for such repair for XOJane in 2012 and it's so heartwarming. I mean the email confirmation she got when the “hospital” received her lamb included the phrase, “I’ve given him a little exam…” Are these people professionals or what? All in all, according to her piece in XOJane, Daisy felt it was well worth her $40 to get professional stitches and a little stuffing added to keep her friend looking great for another 30 years.

On the other side of the equation are the people who run the company Daisy turned to, which is called Realms of Gold. They note on their website that they’re members in good standing of the Doll Doctor Association — who knew that was a thing? Beth, who runs the company, offers to send along photos and progress reports on the stuffed animal undergoing treatment which, she notes on her website, “our younger doll parents have found particularly helpful!”

Of course, this isn’t an enterprise that’s limited to small mom-and-pop shops. For example, Build-a-Bear employs its own “official Bear MDs” who are posed in hospital scrubs on the company's website.

But none of these services can do what CMOM’s upcoming program offers — teaching little fingers a little bit about an age-old skill. Whether boys or girls, all children can benefit from knowing how to do some basic sewing repairs, which could save them trouble and embarrassment when a button has to be popped back on quickly.

The Stuffed Animal Repair program is just a few days away, so if you're near NYC, gather up all those buddies that are tucked away in boxes and start preparing a welcome home celebration for those brave little patients.

Editor's Note: This post has been updated to clarify the museum’s price of admission.