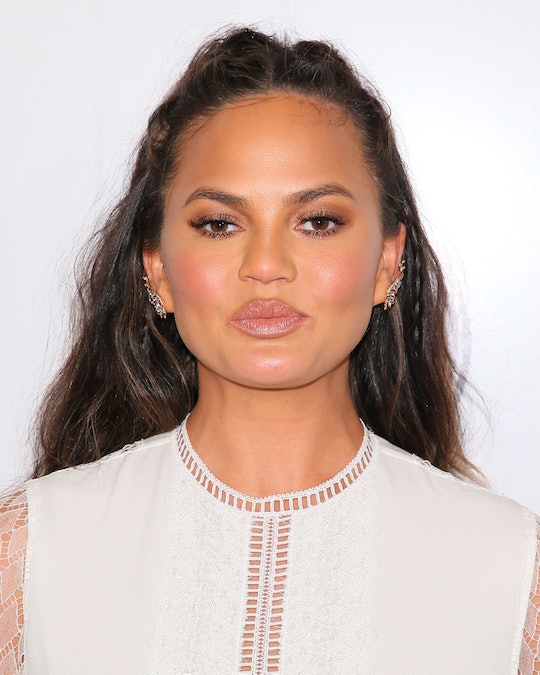 Changing her plans at the last minute, Chrissy Teigen decided that, yes, the Women's March on Washington was too big a deal for her to miss out on, even if it meant ditching her husband, John Legend, for the trip. An inauguration day tweet of Teigen's read: "i was going to go to sundance to support john tomorrow but feeling compelled to support my fellow women. see you at the women's march, DC." Another Chrissy Teigen Women’s March tweet, one that she posted during the march itself, also managed to drum up just as much enthusiasm, seeing as it featured Teigen, fully present at the march.

Teigen's Trump disapproval has been made abundantly clear, even engaging in tweet fights with Trump. It would seem, then, that her attendance at the march would have been a given. It all began when Teigen live-tweeted the inauguration on Friday, starting with a tweet that just read "nope," no punctuation needed. But of course, she didn't stop there. "What a beautiful prayer. makes me wanna grab my puss," she wrote next, followed by another that read: "Oh. it's offensive when I say it though. hm."

Her (very understandable) frustration managed to fuel her trip to D.C. Teigen's first Women's March tweet was just of a photo. It featured protestors in pink "pussyhats," with one smiling participant holding a sign reading "VIVA la VULVA." Her second tweet of the march showed Teigen taking a selfie with a young, smiling protestor. Teigen's caption? "I have hope!!!"

Twitter users were quick to point out a subject featured to Teigen's right. The rainbow flag wearer covered his mouth in shock while he watched the selfie unfold.

Teigen didn't live-tweet the march with the same momentum that she sustained during the inauguration, but Legend tweeted from somewhere else, across the country. In addition to sharing his thoughts on Trump's first presidential actions late Friday night, Legend marched in Park City, Utah alongside plenty of other politically-active celebs at the Sundance Film Festival. Legend even posted an Instagram of a sign held high above a sea of snowy protestors:

By Saturday night, Teigen was back to her old self again, tweeting:

My god, how you were fooled into thinking he cared about you when all he wanted was the painting and placard. Absolutely disgusting.

Regardless, Teigen and Legend managed to stand up for women everywhere, even if they weren't repping from the same location. Besides, their frequently shared platform — Twitter — gives them both plenty of space for political activism and, yes, some optimism.