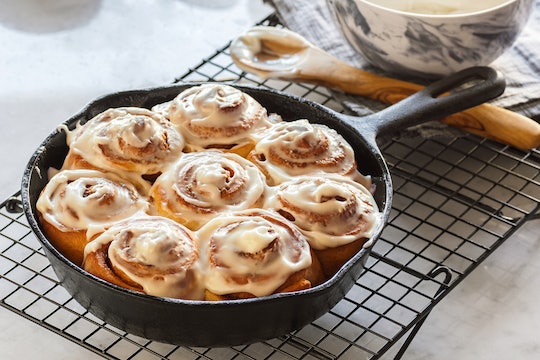 This Cinnamon Roll Recipe Will Increase Your Milk Supply

For nine months of pregnancy. you're focused on getting the nutrition you need to grow and nurture the tiny baby growing in your womb. Sure, you may indulge your cravings sporadically, but you're also well aware of the foods you need to benefit baby. And while those nutritional needs certainly don't disappear once baby is here, there are new culinary perks to breastfeeding... namely, lactation treats. For example, this cinnamon roll recipe that can increase your milk supply and make early mornings with a newborn delightful (or at the very least, more bearable). Sign me up.

The secret ingredient in milk-boosting goodies of all varieties are their galactagogues, a tongue-twister of a word that describes anything that increases a woman's milk supply, according to Verywell Family. There are a variety of herbs, foods, and even medications that are considered galactagogues, but when it comes to baking, tastiness is obviously an equally important factor. These cinnamon rolls created by blogger Jillian Kirby are loaded with ingredients to please both your tastebuds and your nursing infant.

Of all the lactation recipes I've hoarded for future use, this recipe is one of the most impressive. They contain not one, not two, but six different galactagogues, basically guaranteeing that your alveoli (the clusters of cells where milk is produced) will get straight to business making that liquid gold. Oh, and a bonus: These cinnamon rolls are also vegan, which is great for plant-based mamas or babies having any issues digesting dairy. Head over to her blog for the recipe in its entirety, including an optional glaze (that in my humble opinion is really not an option but an absolute requirement). Yum.

If you're a total nerd like me, you may want to see a little bit of the science behind these galactagogues you'll be using. The milk-inducing ingredients used in this particular recipe include besan (a chickpea flour), oat flour, brewer's yeast, flax meal, walnuts, and ginger. Chickpeas, oats, and flax meal have long been considered a natural milk booster, so baking with a combination of these trumps your normal white flour for lactation treats any day. The phytoestrogens found in brewer's yeast "may help with breast tissue health and lactation," according to Healthline, and don't worry – the recipe doesn't call for enough to make your cinnamon rolls taste like beer. Finally, the monosaturated fats found in those walnuts can increase the richness of your breast milk while the ginger helps increase blood circulation to the mammary glands, according to Parenting.

While there are some fancy scientific words behind galactagogues and some reasonable-sounding logic behind their usages, how effective are they really? "While there is anecdotal evidence (aka personal experiences) that some of these substances may improve milk supply, much of their reported benefit may be a placebo effect (when we subconsciously trick our brain that treatment will work)," according to Motherly. However, when it comes to breastfeeding, a little placebo is not always a bad thing. In fact, "Research has shown that a mother’s state of mind can have an influence upon lactation, especially the let-down reflex," according to LowMilkSupply.org. If eating a few galactagogue-filled cinnamon rolls can help you feel confident in your supply and relax while nursing, that may be worth it in itself.

Whether you're stressing about your supply or simply trying to set yourself up for success, you certainly won't regret whipping up a batch of these lactation cinnamon rolls. (Or, if you're a really great friend, bake them up for your favorite new mama.) Pro tip? Label them "Breastmilk Pastries" and you'll basically guarantee you get the whole batch to yourself.

More Like This
Is It Safe To Pump While Pregnant? Experts Weigh In
Parents Have Thoughts After Court Orders Nursing Mom To Use Bottle In Custody Dispute
14 Recipes For Sick Kids When Everyone's Tired Of Canned Soup & Crackers
Chrissy Teigen Nodding Off While Breastfeeding As Miles Chats Away Is Too Relatable
What Parents Are Talking About — Delivered Straight To Your Inbox