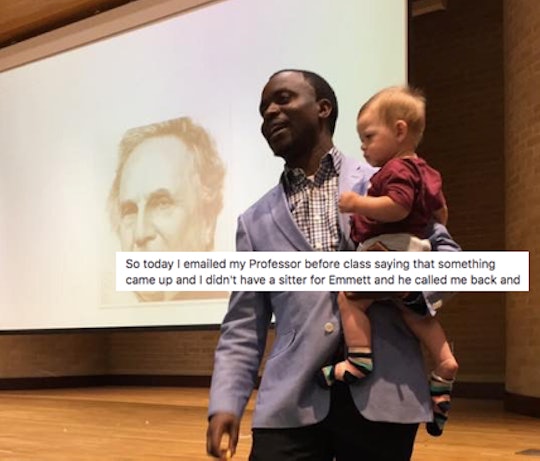 It's so easy to turn the other way or we've all see that person roll their eyes when a mom is struggling in public. There are the jerks who don't offer a breastfeeding mother their seats when all others are taken on a crowded train; there's the widespread inclination to shoot stink eyes at a mom whose toddler has a noisy meltdown at the grocery store. But having a negative reaction to a mom's plight is by no means universal. Case in point: This college professor made this single mom's life easier when she couldn't find a babysitter — and the result is the adorable, happy outcome of simpler times and fairy tales. At the very least, the prof's act of kindness ensured that his student was able to make it to class and know her son was well-cared for so she could enhance her education with peace of mind.

It all started last week when single mom and full-time Texas A&M University student Ashton Robinson emailed one of her instructors with some less-than-stellar news: A change in plans had left her without a babysitter for her 10-month-old son, and she would have to miss class. But, as she later recounted in a Facebook post, Dr. Henry Musoma had a better plan. As she explained, he simply encouraged Robinson to bring Emmett along with her to class. And it resulted in the happiest of endings, in the form of an adorable baby photo on social media, some recognition for a kind man who truly cares, and a mom realizing her university respects her needs.

Robinson decided to take Musoma — who is a clinical assistant professor at the university's Mays Business School — up on his thoughtful offer. And afterwards, she shared on Facebook exactly why his willingness to help her out so much awed and touched her so much:

Being a single mom is so challenging but it's people like Dr. Henry Musoma that make life just a tiny bit easier! THIS is why I'm so proud to be an Aggie! Definitely something I'll never forget and can't wait to someday tell Emmett that it's because of people like this that mommy was able to graduate from the best university in the world.

Perhaps the best part, though, was that Robinson also posted some visual documentation of baby Emmett's first trip to a college class — and it could not be more endearing. In the photo, Musoma looks as though he's mid-lecture before the class while holding a socked and content-looking Emmett. And in a very brief video clip, he points at the large class in the lecture hall and jokingly tells the baby that it seems as though the students didn't do the assigned reading.

Honestly, this story could not have had a happier ending for anyone involved. Which is probably why it has blown up the way it did on Facebook. Less than a week after Robinson took to Facebook to tell the world about her kind-hearted prof on Sept. 7, the post has garnered more than 12,000 shares; the video, nearly 2 million views. It's not at all surprising: When cute babies and people acting decent collide, anything is possible.

As for Musoma, inviting Emmett to class when a student was in need reflects the community-focused values instilled in him from his native Zambia, as he told ABC 10:

He certainly has hit on something true and special. When everyone helps each other out, the places we live and learn in really are just that much better.