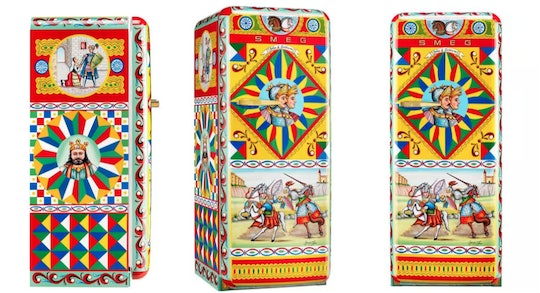 These $50,000 Designer Refrigerators Will Really Pair Well With Your Old Yogurt

Aside from a duck-printed purse that I got for Christmas in the ninth grade, I have little working knowledge of Dolce & Gabbana — apparently less so that I thought. They're selling $50,000 refrigerators as a joint venture with ~couture~ appliance company Smeg, and here I was thinking my old purse was fancy. The floral-printed, high-priced ice boxes were released last fall, but there is a whole line of pricey kitchen gadgets to go along with them now — including an espresso maker that is straight out of my dreams. Interest in luxury kitchen appliances is on the rise in America while time spent actually cooking has never been lower. Never underestimate the power of a good #aesthetic, I guess.

Dolce & Gabbana partnered with the Italian company Smeg to bring about this colorful line of juicers, toasters, coffee machines, mixers, and more, according to Vogue. The products feature floral prints, along with leaf, lemon, pear and cherry designs that point to Domenico Dolce and Stefano Gabbana's background that is rumored to involve food. Aditionally, they are a part of the ‘Made in Italy’ initiative that Country & Townhouse reported celebrates 'family tradition and the importance of maintaining local roots.'

One hundred of the designer refrigerators were released in Milan at the Salone del Mobile and have been on sale since last fall, but Neiman Marcus is now offering more modestly priced kitchen goodies on preorder, and I'm sorry to say that several fridges have already sold out — hard news to swallow for those of us who can barely afford a fresh carton of miso for our fridges.

Gabbana explained, according toVogue, that while kitchen appliances aren't the norm for Dolce & Gabbana, the pieces are a part of the company's brand identity and fit well with their larger design:

Every piece is unique, but they all tell a story consistent with our brand identity. They might be kitchen appliances, but there’s something that is immediately identifiable as Dolce & Gabbana, from the Sicilian barrows to the Trinacria symbol to the marionettes to the Italian lemons and fruits.

Hence: the "Jousting Paladians" fridge and "Sicily Is My Love" toaster.

These aren't the only top-of-the-line appliances that cost about the same as a new BMW. Many people give in to the draw of such gear. Kit Yarrow, Ph.D., a retail psychology specialist, explained to Forbes that people are tempted by expensive kitchen products for reasons of "control, passion, and identity." Additionally, foodies and gourmands look to these items as show pieces in their favorite room of the house. "Their passion justifies the expense," she said.

An interest in such pricey kitchen items is somewhat surprising considering The Washington Post reported that Americans in general are spending less of their time cooking and eating at home. A 2013 study published by The U.S. National Library of Medicine National Institutes of Health found that all Americans, regardless of their socioeconomic status, are cooking less than they did in the past. They are also spending much less time eating at home, the Post reported:

In fairness, looking at pretty kitchen appliances is way more fun than actually using them while toddlers nip at your ankles.

Even you aren't spending quite as much time in the kitchen as previous generations, there's no denying the draw and the beauty of that Dolce & Gabbana kitchen swag. I can't remember the last time that I juiced a lemon, but that $600 lemon juicer sure is pretty. At the very least, these beautiful appliances can serve as some serious Pin-spiration for your own kitchen.