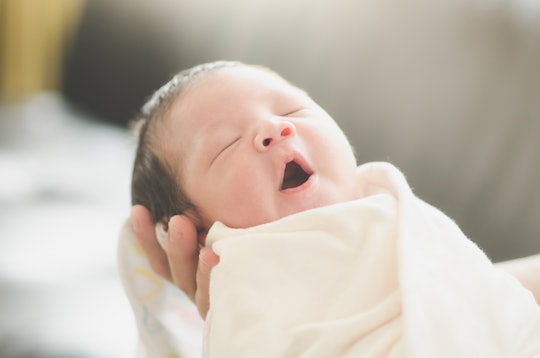 When it comes to giving birth, pregnant women have a number of options. Although many moms-to-be prefer to deliver at a hospital surrounded by a medical team and high-tech equipment, plenty of expecting women have given birth at home or at birthing centers, too. Some swear by water births. Others unexpectedly give birth on airplanes. One place no woman has gone before to deliver a child: Outer space. Or at least not yet. Because apparently, this company wants someone to give birth in space — and Twitter is all like, "Just no."

So here's the lowdown. A startup called SpaceLife Origin wants to have a pregnant woman deliver a child in space by 2024, according to The Atlantic. They're calling it "Mission Cradle." (Because of course they are.) "It’s a small step for a baby, but a giant baby-step for mankind,” said Dr. Egbert Edelbroek, SpaceLife Origin chief strategy and innovation officer, according to the startup's website. "A bold yet realistic objective of SpaceLife Origin is the actual birth of the first human baby in space," the website reads. "During a 24 to 36 hour mission a woman will give birth at 250 miles above Earth, accompanied by a trained, world-class medical team. A carefully prepared and monitored process will reduce all possible risks, similar to western standards as they exist on Earth for both mother and child."

In case you were wondering, Twitter seems to have a lot of thoughts on the matter, which mostly can be boiled down to "nope." One Twitter user wrote, "Call back when all women have 100 percent bodily autonomy here on this Earth and can choose to have or not have a baby, without consequences & men telling her what she should be doing. Then I’ll entertain your start-up." Ohhh, burn.

Another Twitter user simply responded with a meme of a subject of a portrait saying, "Y tho."

Another person chimed in with, "That sounds .... high risk." (My thoughts exactly!)

Yet another Twitter user wrote, "Can we get a grip on keeping babies and women healthy and alive through pregnancy/childbirth on earth, first? Thanks."

To be completely honest, my initial reaction to the whole idea was: "Are these people serious?" Followed by, "But why?!" I mean, childbirth here on Earth can already be pretty risky. So what woman in their right mind would want to potentially put their life and the life of their unborn child in jeopardy — just to be able to say their baby was the first to be born in space. (Side note: What would the birth certificate say?)

According to Nerdist, the endeavor is an attempt to see what the effects of space on childbirth are — because ultimately, that's probably where human life is heading anyway. "Humanity is facing increasing threats to life on earth. Asteroid collisions, super volcano eruptions, global warming, overpopulation and artificial intelligence may lead to an inhabitable earth in as soon as a hundred years," the SpaceLife Origin website explains. "It is uncertain if these problems will be solved in time. Therefor NASA and SpaceX (a.o.) are planning colonizing missions to the moon and Mars as back up plans. Colonizing has no future without learning how to reproduce in space. Our missions provide these learning steps."

Look, I suppose the ultimate goal behind this mission is a noble one. (Considering our president denies humans have anything to do with global warming.) But I have serious doubts about this start-up attracting pregnant women to be human guinea pigs in outer space. Is someone going to jump out behind a bush and yell, "Gotcha!" yet?