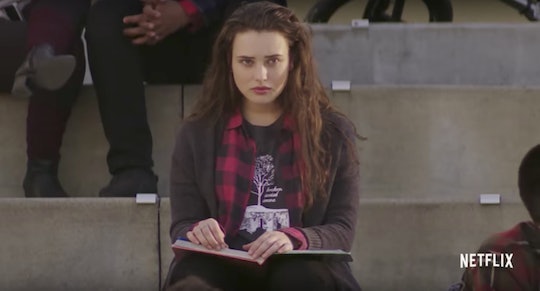 Netflix's 13 Reasons Why alarmed parents for a number of valid reasons. Many worried that the sensitive, suicide-centered subject matter would have negative impacts on young viewers, and now there's research investigating these concerns. A controversial study on 13 Reasons Why has now proven TV really can affect kids, and the findings are quite upsetting.

Published on Monday in JAMA Internal Medicine, researchers monitored U.S.- generated, relevant Google searches containing the term "suicide" in the wake of the show's release. Irrelevant "suicide" searches, such as those pertaining to celebrities or other shows and movies, were excluded from the assessment.

All suicide queries were cumulatively 19 percent higher for the 19 days following the release of 13 Reasons Why, reflecting 900,000 to 1.5 million more searches than expected.

These results are a true testament to the two camps that continue to debate the potential impact of 13 Reasons Why. Of course, an elevated interest in how to carry out suicide is deeply concerning, sparking worry that the events portrayed in the show would encourage imitative behavior. Main character Hannah Baker's graphic, explicit suicide scene pictured Baker cutting her own wrists and falling unconscious in a bathtub. Baker's mother finds her dead soon after. It's a heartbreaking, triggering moment for many.

Reviewing the nature of the other search queries, an uptick in search for suicide help, on the other hand, could show signs that viewers struggling with mental health issues may have felt encouraged to reach out for support after the show's release, as Netflix included suicide hotline contact information and displayed warnings ahead of its most graphic content. In response to the study, Netflix shares that the company "always believed this show would increase discussion around this tough subject matter,” interpreting that this "quasi experimental study ... confirms this.”

So how seriously can these results be taken? "The more someone contemplates suicide, the more likely they are to act,” asserts lead study author John Ayers of San Diego State University in California. “Searches often foreshadow offline behaviors,” Ayers notes. "For me, as a data-driven public health scientist, I see this troubling data as a strong call to action. The show must be taken down,” he insists.

13 Reasons Why has impacted its culture and viewers deeply, and now research is able to quantify its actual influence, with over a million reached. If anything is to be taken to heart from these findings, it's that media affects kids immensely, and any viewing this particular show should be closely monitored by parents.

If you or someone you know is experiencing suicidal thoughts or behaviors, you can find help by calling the National Suicide Prevention Lifeline at 1-800-273-8255.

More Like This
New Study Finds Moms Who Earn More Than Their Husbands Also Do More Housework
Biden Signs Law Banning Unsafe Infant Sleep Products Attributed To Over 200 Deaths
Parents Will Demand $675,000 From Son & Daughter-In-Law If They Don't Have A Kid Soon
This Free Website Connects Parents Who Need Formula With Those Who Have It