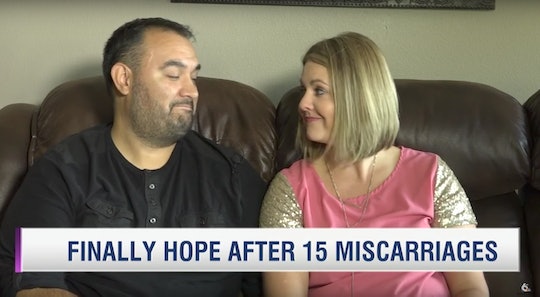 Some people get pregnant as soon as they start trying and unplanned pregnancies happen all the time. And then there are the couples whose journey to parenthood is filled with heartbreak after heartbreak, and even despair and doubt about whether that dream of having a family will ever be a reality. That was the case for Lindsay and Brian Vargas, a Nebraska couple who just became parents after 15 miscarriages, according to local Omaha news station WOWT. Now, these parents have one baby and two more on the way, a turn of events that's nothing short of amazing considering everything they've been through together.

Until their daughter, Henley, was finally born on Oct. 16, the couple decided to keep her a secret, as Lindsay told WOWT. It seems like a strange choice, until you consider all the time they thought they would become parents only to be devastated. In addition to the 15 miscarriages, they have endured three failed adoptions, two failed surrogacy attempts, 13 unsuccessful artificial insemination attempts, and even an ectopic pregnancy, according to WOWT.

They even launched a GoFundMe campaign last year to help pay for the treatments. That's how they met Henley's birth mom, a stranger who heard about their campaign and approached them to ask them to be parents to her not-yet-born daughter.

When Lindsay and Brian — who are 35 and 37, respectively — first got married in 2004, they thought that getting pregnant would take a few months. Instead, the process led them to seek help from a OB-GYN after a year and a half of no luck, they told Yahoo Lifestyle. The high dose of the fertility medicine that doctors prescribed, as well as a lack of monitoring, caused Lindsay to develop an ovarian cyst that required surgery to remove, she told the outlet.

Next up: 13 rounds of in-vitro fertilization over five years, a $3,000 undertaking that yielded what must have been a crushing, unbearable sadness for them both, as Lindsay described to Yahoo Lifestyle:

I kept getting pregnant, but I'd miscarry each time after about eight weeks. We'd hear the baby's heartbeat at our first ultrasound, but at the next appointment, there would be no heartbeat. ... After the first four miscarriages, we stopped telling people we were pregnant. I kept a secret life because I was embarrassed to share that there was no baby anymore.

Tragically, the fact that Lindsay's body kept rejecting the pregnancies forced her to stop trying to get pregnant herself, and she got an IUD, as she shared in an emotional video posted to the GoFundMe page. But, then, Lindsay's sister, Kelly O'Toole, insisted that Lindsay and Brian accept her offer to act as a surrogate for them.

That was no easy road, either. According to the site, doctors had to remove a grapefruit-sized tumor along with an ovary from her sister, a 40-year-old mom of three, after the first ultrasound. And then, the initial artificial insemination — with donor sperm, because Brian has a genetic condition that can cause miscarriages, and O'Toole's egg — was unsuccessful, according to Yahoo Lifestyle.

Now, though, O'Toole is pregnant with twins who her sister and brother-in-law will parent, and it's nothing short of a miracle. And it's more than clear that the couple will be some of the best, most loving and dedicated parents around after all they've been through over more than a decade. Their soon-to-be family of three may have taken much more time, energy, and resources to start than they had anticipated, but it will all have been worth it in the end.