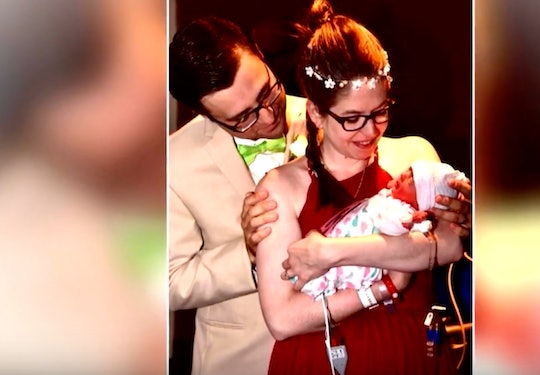 There is nothing like a surprise to turn someone into an expert problem solver. When something comes out of left field, there is no choice but to adapt and make the most of the situation. Take, for example, this couple who married right after their child was born, inside of the hospital, making the most from one major surprise.

Michigan couple, Jael and John Pulcipher, did not expect their newborn baby to arrive on the day of their wedding, but she did. The couple, according to ABC News, had planned to marry on July 29 and expected their daughter to arrive a few months later on September 16. But things didn't go as planned. On the morning of July 25, Jael's water broke and she went into premature labor. Despite having a lakeside ceremony planned on the 29th, their child had other plans for the couple in mind. "I was told that I was not leaving the hospital until I had the baby," Jael told ABC News.

On the day of their wedding, the couple was able to experience more joy than they imagined, welcoming daughter Briar Dorothy and getting married on the same day, just a few hours later. But, instead of that lakeside ceremony they had planned, Jael and John got married in the hospital instead.

While in labor, the couple called their wedding vendors, telling them that the wedding was off, according to ABC News. And instead, they decided to host their guests at the hospital so the guests could meet their new baby and celebrate their nuptials at the same time. According to InsideEdition.com, family members had come into town from seven different states for the occasion.

The couple held their wedding for 70 guests in the basement of the hospital, just five hours after giving birth, with one very special last minute addition to the guest list. And just because the wedding was held in the hospital didn't mean that it wasn't complete. According to ABC News, the wedding was like any other wedding with food, cake, flowers, and even live entertainment. Jael told ABC News that guests truly enjoyed the unexpected experience:

Guests said that it was the most fun and crazy [day] and it was just a representation of us. They were happy we could give them both baby and the wedding.

While the guests seemed to really enjoy the party, both John and Jael seemed overjoyed to welcome their daughter on what was definitely the greatest day of their lives. John told UpNorthLive.com on his wedding day:

This has honestly been the best day of my life. When you take the birth of your first child and also your wedding day, you know those are honestly the two best things in my opinion that a human could ask for. It's just an absolutely amazing day.

Jael and John Pulcipher are nowhere near the first people to get married in a hospital. There have been plenty of cases where unexpected moments collided with wedding dates. There have been couples who married hours before giving birth and others who were married by the hospital staff hours after their baby arrived.

But the Pulcipher's story teaches everyone that the best laid plans often go astray. And that sometimes, the best solution is to make the most of these surprises.