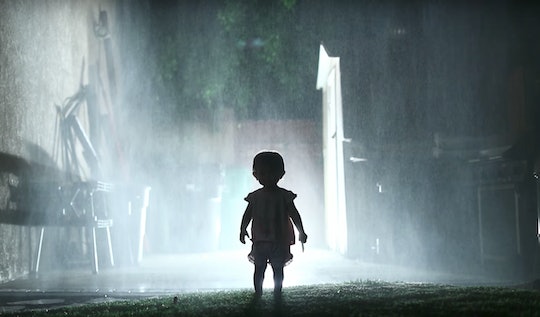 This Couple Made A Horror Movie Trailer To Reveal Their Baby’s Sex, & It Will Freak You The Hell Out

It's true that pregnancy and parenting can be scary. But one California couple revealed the sex of their baby in the creepiest way possible, just in time for Halloween. Their video is styled like a perfectly chilling horror movie trailer and riffs on several horror films to set up their big announcement apart from any other baby sex announcement you'll ever see. Judy and Gavin Holt of Orange County, California, made a truly freaky four-minute video that even starred their 2-year-old daughter Remy. The Holts totally nailed the "kids are creepy" horror trope in their video, complete with creepy baby piano soundtrack and warped lullaby tune.

"Should we do the reveal using pink or blue balloons?" Judy asks over footage of their daughter Remy innocently playing in the daytime. "I don't know, it's kind of been overdone," Gavin replies. But then, things go from sweet and innocent to "something is very, very wrong here" — and then their reveal video goes off the rails straight into Horror Town. This isn't the first time the Holts have turned to video to share special pregnancy news. When Judy and Gavin were pregnant with Remy, they also announced their pregnancy with a horror movie trailer.

Now, with baby number two on the way, the Holts have upped their pregnancy horror movie trailer game in a big way, paying homage to at least five different horror films in the process. Their horror movie trailer opens with some camera trickiness as Remy is shown playing on the floor in front of a mirror — but things start to get a little weird, as Remy's reflection no longer matches up with what she's doing. It's a brilliantly executed creepy effect, not unlike this super freaky scene of Richard Gere in 2002's The Mothman Prophecies.

But the freakiness with Remy doesn't stop there: There are shots of Remy in her crib, with sinister lights flashing mysteriously through the bars of her crib. And of course, there's creepy music playing in the background, because kids and creepy music go together like peanut butter and jelly when it comes to horror movies. The scenes with their daughter in the crib totally reminded me of the scene from Paranormal Activity 2 when the baby straight up levitates out of their crib.

Then Judy makes a totally innocuous suggestion: They should use a Ouija board to ask the baby themselves what its sex is. If you've listened to the Spooked podcast from Snap Judgment, you know that Ouija boards are never a good idea. Judy and Gavin watch in horror as the planchette begins to move of its own accord, spelling only "GET OUT," in yet another shoutout to the Paranormal Activity franchise, this time to that spooky scene with the Ouija board in the first movie.

From there, the paranormal activity in the Holt household ramps up, as things start to get really creepy. Remy starts walking out of the house alone, seemingly in the middle of the night, only to stumble upon a pair of headless mannequins in her backyard. You know, like you do. All I could think of was when Heather finds Mike standing in the corner at the end of The Blair Witch Project.

Remy is then seen sitting in front of her dad's whiteboard, seemingly having written baby names all over it of her own accord — nigh impossible for a 2-year-old to have done. I couldn't help but think of the big "All work and no play makes Jack a dull boy" reveal from Stephen King's The Shining — which, for the record, is easily one of the scariest Stephen King movies.

Ultimately, the Holts make their reveal with yet another creepy Stephen King reference, this time to IT — and, ironically enough, with the very thing they thought was so overdone: Balloons. Which, by the way, thanks Stephen King, for permanently making balloons creepy AF.

I won't spoil the surprise for the Holt's latest addition to their family — you can watch their super spooky horror movie baby sex reveal here for yourself.

Their little bundle of horror, er — joy — is set to arrive this November.