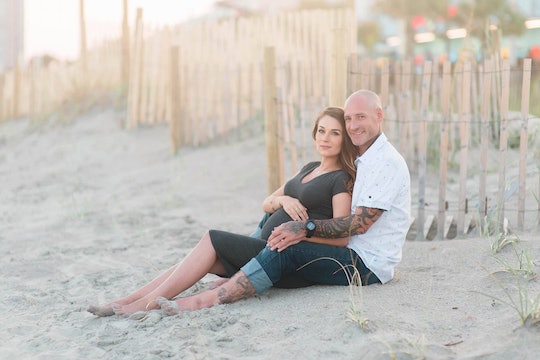 This Couple Set Up The Sweetest Gender Reveal Photo After Suffering A Miscarriage, & It Will Make You Cry

Gender reveals have become a pretty popular trend among expecting parents, and it's led to all sorts of creative ideas about how to announce to the exciting news to the world (custom cakes, balloon launches, pink or blue confetti...). But after he and his fiancée suffered a heartbreaking loss early on in their pregnancy, New Jersey dad Matthew Ostergaard came up with a unique and beautiful gender reveal idea — and the photos they captured were incredible. This couple's Ferris wheel gender reveal has a very special meaning behind it, and it's one that's touched the hearts of online strangers everywhere.

When Ostergaard and Adrianna Zbik learned earlier this year that they were expecting twins, they were super excited. But at 16 weeks along, they were told they'd lost one of their babies to vanishing twin syndrome — a phenomenon of multiple births where only one baby is miscarried, according to TODAY. The news was understandably devastating to the couple, and Ostergaard said Zbik "sunk into bad depression," following the news. So in an effort to help her feel excited again about her pregnancy, Ostergaard planned one pretty impressive surprise: he arranged to have the Myrtle Beach SkyWheel — a 187-foot tall Ferris wheel — lit up in pink lights. And best of all, he hired a professional photographer to capture the amazing display.

For the couple, the Ferris wheel reveal was a big moment — not just because it was a grand, romantic gesture, but because it was also a way to honor their loss in a special way. And unsurprisingly, the heartfelt tribute has really resonated. Ostergaard tells Romper that although he initially just intended to share the photos with his family and friends, people from all over have been reaching out to share their own stories of infant loss:

The response to the photos has been overwhelming. What started out as a gesture to just cheer up one person has turned out impacting so many people in a positive way. It may be them just sharing their experience with vanishing twin syndrome and finding some closure, or just a feel-good story that makes them smile. Either way it feels good to know that our love for each other has brought happiness to other people.

The photographer, Kelly Marie Matthews of Kelly Marie Photography, tells Romper that getting to be a part of Ostergaard's special surprise felt like a big deal. She says, "When Matt called me and told me his plans I was so excited and honored to have the opportunity." And, much like Ostergaard himself, Matthews says she's been pretty blown away at the attention the photos have received. She says,

I figured some local station in this area would share it since the Skywheel is a well known landmark, but I had no idea it would spread like this. I'm so happy for Matt and Adrianna.

While the photos may have originally just been intended to commemorate their pregnancy and to honor their journey, Ostergaard and Zbik say that the attention their reveal has received makes it pretty clear that pregnancy loss is an issue that touches many people, and they are glad to add to the conversation in a way that might be helpful. Ostergaard says that Zbik was "extremely happy that our story is reaching and helping so many that have [experienced] the loss of a baby," and added that the fact that their reveal has resonated with others has made it that much more special:

Although the gesture was for her she is more then happy at the outcome. Because if can reach and help just one person that has gone through the same thing, then it's all worth it.

Miscarriage is certainly not an uncommon experience: as many as 50 percent of all pregnancies end in miscarriage, according to the March of Dimes — and even though vanishing twin syndrome might not be well-known, it actually affects over a third of all twin pregnancies, according to TODAY. Yet the stigma surrounding pregnancy and infant loss means that, often, couples are left to grapple with the loss on their own without much support.

As Ostergaard and Zbik learned first-hand, that can be especially difficult when you still have another baby to carry — grieving the loss one one child while preparing to welcome another is no easy feat. But by sharing their photos, the couple has helped open up the conversation about pregnancy loss, to let other couples who have been through the same experience know that it's OK if moments like a gender reveal are complex and complicated. More importantly? They've also made it clear that celebrating those moments in light of the loss they've experienced is still totally worthwhile, if it's what feels right.

For now, Ostergaard and Zbik are looking ahead to welcoming a new member into their family — their daughter, Mila, is due on Christmas Eve, according to People. But it sounds like it may not be the last time that Matthews will be a part of their lives: according to TODAY, the couple may bring her back to photograph their wedding, and for a newborn shoot once Mila arrives. So while Ostergaard's big idea may have started out as just a sweet way to make his fiancée smile again, it's clearly proven to be much bigger than that. And they've got the photographs to prove it.