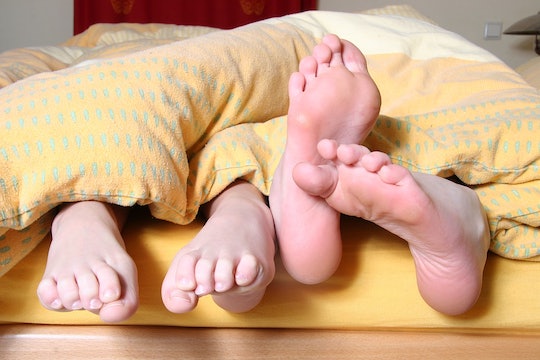 This Couple's Toddler Walked In On Them Having Sex

Every parent dreads this moment, but it’s only a matter of time before your kid catches you doing something you would never want them to see you doing. And, for one couple, even though they planned everything to a T and their kids were tucked into bed for the night, things still got a little messy. And rather than keep this hilarious ordeal to themselves — and thank the heavens they didn't — these parents’ reaction to their toddler walking in on them having sex will make you cry with laughter.

In a lengthy Facebook post, Emma Lou Harris — a blogger and mom of two from Ireland — went into hilarious detail about the moment her 3-year-old daughter caught her and her partner, Joe, getting it on.

"There's an inevitable moment in every parents [sic] life when your children catch a glimpse of something you'd much rather they didn't," she wrote on Facebook. "Something that the retinas of any grown adult human would need a full lifetime and then some to erase from their traumatised memory boxes but your own child?"

Harris explained that before the traumatic event happened, she and her partner were feeling pretty good. She had had two beers and he had emptied the dishwasher without being asked. Win-win.

"I knew right then and there it was game on," she wrote. "Pants. Off!"

"We shipped the kids to bed as quick as lightening and the very moment they slipped into a slumber, mission slipping into other things commences for us as we hopped on straight down to sexy town," Harris wrote on Facebook.

She explained that just as things "were getting heated," a tiny voice emerged and said: "Mammmmmmmmy??????????"

"HOLY SH*T BALLS!!!!" Harris wrote. "My panic sweat glands jump into emergency mode busting open like a military operation and my vagina zips itself up to my back immediately before I've even had a chance to turn my head." She continued:

I look up to see a moving smudge of colour in a 'my little pony' night gown rubbing its eyes and whinging. I pray to the baby Jesus that we have a poltergeist and I also pray it's legally blind. My vision is blurred with both the sheer fright and with truth tears over fears of who I'll find behind the blur of doom. I knew the answer.

After she realized what had just happened, her fears were solidified and Joe just lost it.

"In that same split second I hear a small girl scream," she wrote. "It's Joe, it was the noise accompanied by him leaping off me higher than a kangaroo hurdler while very nearly giving himself a home circumcision from the ceiling fan in the process."

While Joe was "rocking back and forth like he's going through an exorcism," Harris wrote that she needed to make sure her vision wasn't fooling her — and it was not.

"It’s Frankie, my poor poor misfortunate child," she wrote, adding that they had no idea how long she'd been standing there or what she had seen, if anything. But all she knew was that she had been in their room because she lost her pacifier.

"She's rubbing her eyes and momentarily I consider the fact that she may actually be trying to scratch them out," Harris wrote.

She then gets Frankie back into bed, but she and Joe stayed "awake all night staring at the ceiling" and did not "speak not one word to each other."

According to Metro, this incident happened about a month ago and Harris is just now ready to talk about it. She wrote on Facebook:

All I know is, if in the future, My poor poor innocent child ever comes to me and tells me she remembers a very vivid dream where two large warthogs were trying to give each other a hoosh over a wall or that two friggin tapers where playing an aggressive game of twister, well, I guess I'll have my answer.

"Myself and Joe are due to finish our Trauma Counselling sometime in the year 2045," she concluded the post.

Harris shared this hilarious account just days ago and it's already gone viral, with more than 1,500 likes and hundreds of shares and comments — a true testament to both the joys and horrors of parenthood. And while their experience is probably every parent's worst nightmare, it's a really good story.