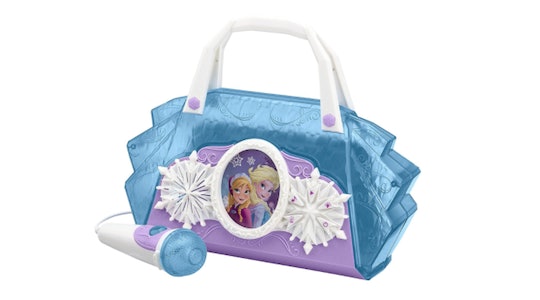 This ‘Frozen’ Boombox Is Flying Off The Shelves, So Get Yours ASAP

With the holidays approaching at lightning speed, your frantic search for the hottest holiday toy is likely well under way, and your kids likely have a few ideas of their own about what that toy should be. But joy to the world, because your harried hunting is over as of now: The toy your kid (and apparently every other kid) wants this year is the Disney Frozen Cool Tunes Sing Along Boombox, which is flying off Amazon's virtual shelves as you read this. No big shock for any parent of a young child who's obsessed with the flick (which is to say, pretty much who still needs to be driven to and from school), but why is yet another plastic plaything covered in pictures of Elsa and Anna exactly what your playroom needs?

Well, for one thing, the insanely popular Frozen boombox is a deal (currently marked down to $21.99 on Amazon, the original price was $30). For another, it gives your kid yet another excuse to do her all-time favorite thing in the world, which is to belt out "Let It Go" over and over and over again. (And then, on the rare occasion when she gets tired of singing "Let It Go," she can switch to "Do You Wanna Build a Snowman," but she's only going to sing that one two or three times in a row, tops before turning to her #1 song of choice.) The Cool Tunes boombox comes with a legit working microphone and plays all of the movie's greatest hits, of course, but that's not all: While your kid sings, the boombox puts on a flashing purple light display! (Because purple is the best, obviously.) And, as the manufacturer description points out, it also comes with a handle, so your kid can take her Frozen karaoke show on the road.

Perhaps the best feature of all, however, is that you can plug in an MP3 player and use the boombox as a speaker to sing along to any song at all. Just in case someday in the distant future somebody feels like maybe they can't handle hearing "For the First Time in Forever" ever again. Or for someday in the not-as-distant future when your kid decides to go on an all-Moana binge. Again.

At some point, however, your child will go back to her icy roots, and her Frozen obsession will begin anew. That's the thing about this movie: It's more than just a pretty good family-friendly film, it's an obsession. It's a thing. Even celeb kids aren't immune to the tale of sibling love and girl power; North West was caught on video riding on her Frozen suitcase through the airport by aunt Khloe Kardashian:

#AirportGoals, anyone? We're betting the Cool Tunes Boombox is on North's Christmas list this year (we're also betting that dad Kanye West will take control of that MP3 player asap). Sure, Kim Kardashian would probably prefer it if her daughter had more high fashion taste in accessories, but it just goes to show how powerful the frosty fairy tale truly is.

Another set of celeb tykes who'll probably be expecting to find this boombox under the tree? Kristen Bell's daughters, naturally. (Bell was the voice of plucky younger sister Anna, which you of course already knew.) How do we know Bell's kids are Frozen fans, apart from the fact that they're practically related to a cartoon character? Because one of them actually forced her mom to dress up for Halloween as... Elsa. Ouch, talk about an insult.

The thing is, we get it. There's just something about Frozen that makes us not really mind when our kids ask to watch it for the eleventy zillionth time. Is it the heartwarming story? The whimsical winter wonderland scenery? Whatever it is, we're just not ready to let it go (sorry), so might as well just sing along!