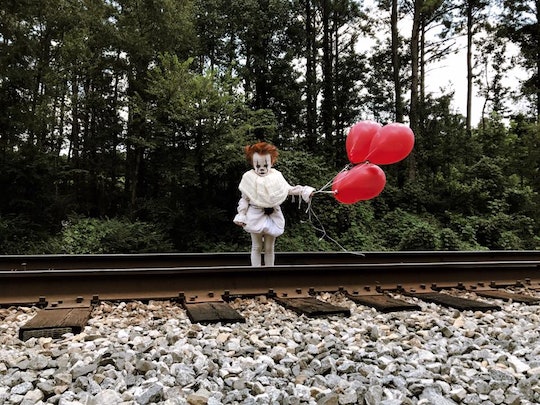 Is there anything that millennial parents enjoy more than a good ol' Instagram-worthy photoshoot? We pose for wistful maternity photos while pregnant, celebrate our babies' first birthdays with professional cake smash shots, and, well, are you even really a modern parent if you haven't paid someone to photograph your child in field or on an abandoned train track? But the popularity of these Pinterest-perfect photos has meant that it's actually kind of a challenge to find new inspiration for your child's photos if you're not content with following the trend. If "unique" is your goal though, then artist Eagan Tilghman has definitely got you covered — but to be clear, this creepy AF It child photoshoot might just give you permanent nightmares (consider yourself warned).

To be fair, the Mississippi high schooler probably wasn't angling to promote a new approach to family photography when he decided to dress his 3-year-old brother, Louie, up as Pennywise, Stephen King's killer clown. And it's also probably safe to assume that newborn photographers likely won't be inundated with requests for evil-clown-themed photoshoots anytime soon. But Tilghman's photos have definitely captured the internet's attention: they've been shared thousands of times on social media, according to HelloGiggles, and Tilghman even got an online-thumbs-up from It remake director Andy Muschietti, who liked one of his photos on Instagram (pretty cool).

When Tilghman first posted his photos to his Facebook page, he didn't seem to realize that the images would soon go viral, and simply wrote, "I got bored." But after it became clear that the shoot was a big hit with internet strangers, he went back to his page to explain his inspiration. And while the photos may just seem like a super creepy nightmare come to life, Tilghman wrote that, for him, it was all about making his creative vision a reality:

Just wanted to put these out there one more time to explain, this is my mind. Like it's very rare for me to be able to put my artistic vision out there and it be portrayed correctly. My pictures never really look like I want them to. Don't get me wrong, I love creepy clowns but my mind isn't just scary clowns and unsettling images. But the creativity in my head almost feels like it flows off of my fingertips. You can see an image and feel things with it, and I'm proud to say these are perfect, therefore they're a perfect little glimpse into how I see the world.

Tilghman told Mashable that the inspiration for the shoot came after his 4-year-old brother, Hosea, asked him if he could paint his face like the Joker (definitely a perk of having an super-talented artist big bro). After he did so, Tilghman said they "just had the idea to dress Louie up and take a few pictures," and they clearly turned out every bit as creepy as you'd expect. *Shudder*

While Tilghman may not have originally been expecting the response he's received, he's now hoping that his work might attract the attention of Ellen DeGeneres — and there's even a hashtag, #getlouieonellen.

But while the viral "fame" Tilghman's received is a testament to his talent and his majorly bright future (did I mention that he's still in high school?), he wrote that what he's loving most is his brothers' excitement:

Honestly, as someone who isn't exactly a fan of clowns, I know I'm not alone in saying that these photos are kind of terrifying, and now I'm probably going to go watch some kitten videos on YouTube for a much needed internet palate cleanser. At the same time, it's also seriously cool to see what started out as just a fun idea between brothers come to life in such a creative way. And Tilghman definitely deserves his moment in the spotlight.

More Like This
Kim Kardashian Says She's "Shaken" By Balenciaga's Ad Campaign Featuring Children
Here Are Parents' Top Trending Searches In 2022, Because Google Really Is Our BFF
Viral Reddit Post Asks If A Toddler Can Watch Cartoons Without Headphones On A Plane
Over 10,000 Sippy Cups & Bottles For Toddlers Recalled Due To Lead Poisoning Hazard