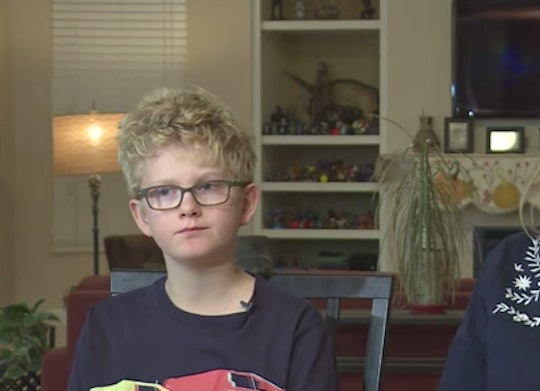 One of the many things that Cub Scouting focuses on is building character, according to the organization's website. Learning when to speak up about something you care about can be an important part of developing your character. But when Ames Mayfield spoke up about an issue he cared about, he wasn't rewarded for his courage and insight. Instead, the cub scout was reportedly kicked out of his den for asking a senator a tough question about gun safety.

When State Sen. Vicki Marble visited Ames' den on Oct. 9, he had a very specific question for her. Ames asked, according to 9News:

Why on earth would you want somebody who beats their wife to have access to a gun... There's something wrong in our country where Republicans believe it's a right to own a gun, but a privilege to have health care.

Ames' question is extremely timely — there have been more than 49,000 total incidents of gun-related violence in the United States in 2017 alone, according to the Gun Violence Archive. And his statement comparing the right to own a gun to the right to accessible health care is an incredibly astute one, especially for an 11-year-old.

But instead of being rewarded for his thoughtful questioning, Ames was reportedly cut off from continuing by his den leader — and a few days after the meeting, Ames was kicked out of the group, according to The Denver Channel/Denver7. Lori Mayfield and the Denver Area Council of the Boy Scouts did not immediately return Romper's request for comment.

As aforementioned, the Cub Scouts are committed to character building, and scouting is supposedly "dedicated to bringing out the best in people," according to the Boy Scouts of America. But in this case, when Ames showed his true character and wasn't afraid to question a political leader over a very tough issue, the incident actually brought out the worst in his own scouting community.

Ames reportedly asked Marble that specific question because the senator co-sponsored a bill to allow domestic violence offenders to continue to own a gun, according to The Huffington Post.

Though Ames' mother Lori said he was praised for his “thorough” list of questions by both the senator and the cub scout leader at the time, she said the den leader was upset by Ames’s questions, according to The Washington Post. Lori said the den leader told her her son’s question was "disrespectful and too political." As a result, Lori says Ames was kicked out of his local Cub Scout den, though he remains a member of the larger "pack," according to the Denver Area Council of the Boy Scouts.

But it's not like Ames was the only Scout who asked "political" questions. Other cub scouts asked the State Senator about things like fracking, the border wall, and fossil fuels, Lori said, according to 9News.

And in any case, it doesn't really make sense to invite a political leader to speak to a bunch of cub scouts and then expect them to avoid asking political questions. Marble is a politician — the questions she gets should be inherently political, whether they come from an 11-year-old or one of her adult constituents.

His mother said Ames researched the state senator before the den meeting, according to The Denver Post. And recently, Lori said, Ames “has taken great interest in politics." He even recently ran for student council and executive council treasurer at his school, and won both elections, according to The Washington Post.

But now Ames has lost his "den" with less than four months to go before transitioning from the Cub Scouts to the Boy Scouts, Lori said. And although the Denver Area Council of the Boy Scouts is reportedly working with his family to find a better fit, it's not really fair to him or his family to have to do that. Ames was supposed to prepare questions for his political representative — he did that.

Luckily, it sounds like Ames is making some new connections that will possibly lead to better mentorship opportunities than what he was offered by his den. Former Congresswoman and gun safety advocate Gabrielle Giffords tweeted about him on Thursday, saying: “This is exactly the kind of courage we need in Congress. Ames, call me in 14 years. I’ll campaign for you.”

Plus, Giffords’ husband, astronaut Mark Kelly, called Ames and Lori Mayfield that night to have a conversation about the incident, and he reportedly told Ames to "keep asking tough questions," according to Fox 31.

And I couldn't agree more. We should all be more like Ames, and have the courage to always ask our own political leaders the tough questions.