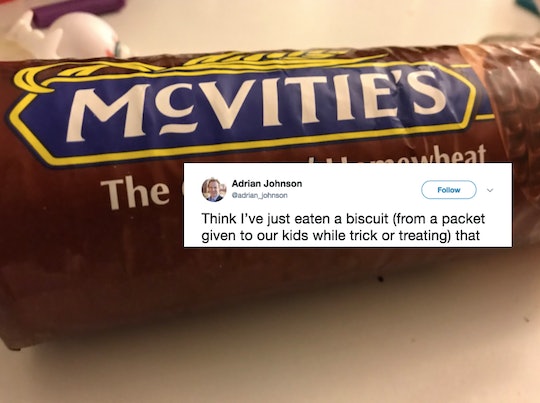 It's no secret that parents eat the bulk of their kids' Halloween candy. It's a longtime tradition many parents look forward to, as there's nothing better than indulging in over-processed junk while you binge your latest Netflix obsession. Some parents might even argue that they're doing their kids a service by eating their Halloween candy (insert flimsy reasoning here), but everyone knows that parents are just looking for any excuse to eat copious amounts of candy. Well, I have some unsettling news regarding your post-Halloween festivities, parents. Decades-old candy could be lurking in your kids' Halloween candy, a disturbing scenario that a dad in the United Kingdom recently encountered. Yes, this dad accidentally ate candy from 1999, and his recounting of the experience is bone-chilling.

On Tuesday, a dad named Adrian Johnson took to Twitter to reveal one of the most spooky and horrifying tales you'll hear all year. Johnson, like many parents, rummaged through his children's bags of Halloween loot following a fun night of trick-or-treating. Johnson reasonably expected to find a delicious treat in his search — a scrumptious Reese's Cup perhaps — but instead he came across something truly horrific — a milk chocolate biscuit that expired in 1999. The most terrifying part part? Johnson accidentally ate the decades-old biscuit. Are you screaming yet? Because I am.

As one might expect, biting into a candy bar that's old enough to vote isn't a pleasant experience. Johnson said of the vomit-inducing experience, according to Us Weekly:

My first mouthful, which I ate, I just thought, ‘that’s weird’. Second bite I knew there was definitely something wrong with them. That second bit ended up in the sink. And I had to rinse my mouth and brush my teeth. I can’t really describe the taste. Just an awful, gone-off, long-lingering bad taste.

If you have medical anxiety like me, you're probably recoiling at Johnson's anecdote. I once convinced myself that I had mercury poisoning after eating sushi for dinner twice in one week — I don't know what I would do if I accidentally chowed down on a chocolate biscuit that was made during Season 6 of Friends. It's safe to say my doctor would block my number.

Although eating old candy can be anxiety inducing, it's typically not a major health concern. Dr. Ingolf U. Gruen, an associate professor of food chemistry in the food science program at the University of Missouri, explained, according to Deadspin:

The water activity of chocolate is very low. Which means microorganisms cannot grow in chocolate. So unless the chocolate was contaminated with microorganisms to begin with there should be no issue with microbial spoilage, even after 20 years. However, if the wrapper is removed and it sits in humid or moist conditions, all kinds of stuff can eventually grow on the surface.

In short, unless a chocolate treat is left sitting out unwrapped, you'll likely be fine if you find yourself in a situation similar to Johnson's. It's also important to note that the white spots you might see on old chocolate isn't mold, but "rather a splotch of fat or sugar that has risen to the surface," according to Slate. Fat splotches. Nice.

So, will Johnson confront his neighbors about the old biscuit? Johnson told the Independent that he doesn't want to shame his neighbors, which is actually really cool. This whole situation is more than likely an accident, and it's nice that Johnson wants to give them a friendly heads-up. Johnson said, according to the Independent:

It was late on so I didn’t go back to the neighbours but I might pop round tonight when I get back home – more for their sake than to complain, as who knows what else they’re keeping in their cupboards.

Not to mention that Johnson's two daughters are totally loving this situation. Johnson revealed, according to the Mirror:

My kids, Poppy and Eidy, found it hilarious this morning when I told them the story as they were asleep when it all happened. They did point out that I shouldn’t have been pinching their Halloween treats in the first place.

Let this be a lesson to all the parents that want to "pinch" their child's Halloween treats this year: check the expiration dates.