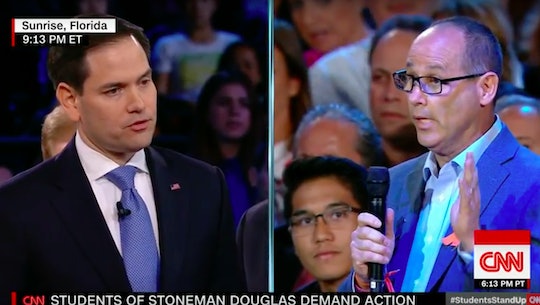 Exactly one week ago, an armed gunman entered a Florida high school and killed 17 people with a legally purchased gun. In the wake of the devastation from this incident, a conversation about gun violence and a ban on assault weapons has emerged. During a town hall meeting between Florida senators and the survivors of the shooting, one grieving dad at the Parkland Town Hall meeting confronted Sen. Marco Rubio is the most powerful thing you'll see in regards to the anger and emotion that people are feeling in the aftermath of yet another tragic mass shooting.

Fourteen-year-old Jamie Guttenberg was one of the 17 victims that lost their lives last week, according to TIME. Her memory will not be lost, especially due to her father Fred Guttenberg, who has been incredibly outspoken about his daughter and gun control in the seven days since the shooting occurred.

Guttenberg voice was heard loud and clear on Wednesday when he finally got to confront his lawmaker, Rubio, who could very well make a change at the nation's capital when it comes to how the United States approaches gun violence. And his conversation that he had with Rubio during the town hall meeting is so important, if only for getting his message to Rubio across. Why aren't the politicians doing something about it? Why did his daughter have to die at the hands of a school shooter when it is something that should be able to be prevented?

During his time that he had with the senator, Guttenberg did not hold back, calling Rubio and President Trump "pathetically weak," according to the Hollywood Reporter. "Look at me and tell me you will do something about guns," Guttenberg told Rubio, but her couldn't do that. While Rubio skirted around the question, Guttenberg relayed the horrible experience that his daughter never should have gone through. "My daughter, who was running down the halls when she was shot, was killed by these guns. If you can't see that, then I'm sorry," Guttenberg said.

You can see the anger and sadness in his face and hear it in his voice in watching the clip from the town hall meeting — and Rubio does nothing to help him or answer his question. Instead, Rubio outlined what kind of change he believes should happen but does not outline his plan to act on it. — Rubio also told him he does not support banning guns altogether. If you weren't participating in the conversation about gun control, hearing Guttenberg and Jamie's stories might make you want to become a participant.

But, as previously stated, Guttenberg has been using his platform in the past week for good. Just two days after the school shooting occurred, cameras were there to capture Guttenberg's anguish when he gave a speech at a vigil for the victims, according to ABC News. This speech was only the beginning of Guttenberg becoming outspoken about gun safety measures. He said, according to ABC News:

Jamie was such a special kid. All of the kids here are. What is unfathomable is Jamie took a bullet and is dead. I don't know what I do next. My wife is home. We are broken. But I can tell you — don't tell me there is no such thing as gun violence.

What Guttenberg did next — confronting Rubio the way that he did — was so admirable. If he wasn't going to ask Rubio the tough but obvious question about allowing the sale of guns in the United States, then who was? And people who watched definitely paid attention to what he had to say. By speaking out, Guttenberg is giving a voice to so many people who have been a victim of gun violence but no longer have a voice to do so. Viewers at home, as well as Rubio, finally got to listen.