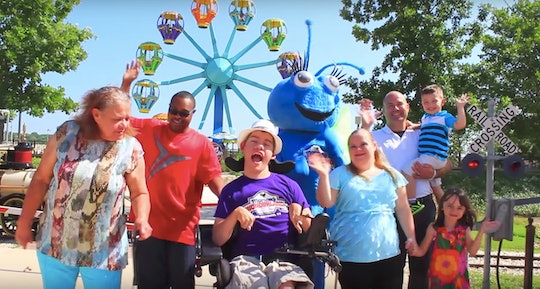 This Dad Built His Daughter With Disabilities Her Very Own Theme Park, & It Will Make You Sob

On a family vacation when Gordon Hartman's daughter was 12 years old, all she wanted to do was play with a small group of kids at the hotel swimming pool. When the other kids got out of the pool as his daughter Morgan approached them, Hartman was struck by how his daughter was rejected by them — and it became a moment of profound inspiration. So this dad built his daughter with disabilities her very own theme park — and kids from around the world can come and play, too. Morgan's Wonderland opened in San Antonio, Texas in 2010 and in June, opened the world's first fully-accessible water park, called Morgan's Inspiration Island.

In a 2011 TEDx Talk, Hartman described his motivation to create a park inspired by his daughter — but not exclusively for his daughter. "There's got to be a place where we can take Morgan to where everybody understands what's going on there in the element of play and there'll be interaction between those who have special needs and those who don't have special needs." Hartman, a successful homebuilder, leveraged his connections and expertise to transform 25 acres of a former rock quarry into one of the most inclusive amusement parks in the world, according to The San Antonio Current.

According to its website, Morgan's Wonderland features more than 25 completely wheelchair accessible experiences from rides to playgrounds. With the addition of Morgan's Inspiration Island, six new elements, including a River Boat Adventure Ride, allow park goers of all ages and abilities to beat the scorching Texas heat for some awesome summer fun. Hartman told Mashable, "Our goal is to provide a great guest experience in an inclusive, safe, comfortable, not-overly-crowded environment."

Morgan's Wonderland admission is waived for any guest with disabilities. Perhaps what's most inspiring about Hartman's park is that even though it was designed to be as accessible as possible for people with disabilities, it's open to anyone and everyone. Regarding the opening of the new water park, Hartman said in a statement, "Like Morgan's Wonderland, Morgan's Inspiration Island is not a special-needs park; it's a park of inclusion." Hartman told People, "It’s about not letting anyone feel different."

The inspirational impact of Morgan's Wonderland also extends beyond just a fully inclusive amusement and water park. The site is also home to The Academy at Morgan's Wonderland, a private school for students with disabilities, as well as the Children’s Rehabilitation Institute of TeletonUSA, a non-profit pediatric rehab center. Hartman's devotion to his daughter Morgan, is more than just an inspiration of personal and financial investment — he's left a profound legacy of inclusion to benefit any person with disabilities and their families.