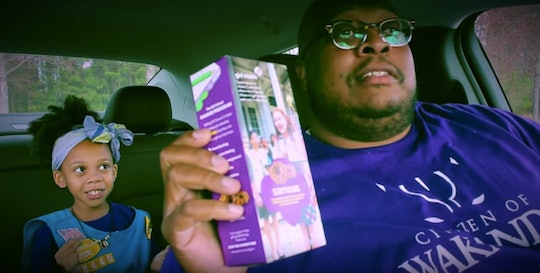 Every parent of a Girl Scout knows that selling cookies turns into quite the family affair. It's tough work and getting your girls out to the grocery store or getting them to go door to door unsupervised is not really an option. At the end of the day, parents end up selling most of the cookies, which is why this dad's viral Girl Scout cookie remix song with his daughter is so amazing and so hilarious. Hey, you gotta make it more interesting sometimes.

The video features scout leader Seymore Harrison Jr. and his 6-year-old daughter Charity Joy in the car playing the Childish Gambino's "Redbone." But when the lyrics kick in, it's all over. The video was shot in one take outside their home in Duluth, Georgia, and has amassed more than 2 million views, according to The Houston Chronicle. They had three songs in mind, but could only find an instrumental to "Redbone," and it really works. As Harrison says in the video, it's some "good cookie-selling music."

Charity Joy starts things off by holding up a box of cookies and singing their praises. "Thin Mints, you wanna order some before it’s too late. We also got Trefoils and they taste great. Tagalongs will make you feel fine,” she sings, bouncing her little head around to the groove.

Her dad jumps in for a couple verses and they actually harmonize pretty darn well. Harrison says in the video, "Buy these cookies, stay woke."

Harrison and Charity Joy finish the tune singing together, saying:

It's so adorable, it hurts. Harrison told ABC News, "She did this, I just wanted to be supportive. It was just a song that we both like and she decided to put cookies in the song. We are so surprised. We had no idea it would go that far."

He tells Romper that sales are good, too. On Sunday afternoon he said, "Sales are going well, at last check a hour ago, 1254 boxes to go before reaching 5000 box goal." She initially only wanted to sell 1,300 boxes, so the video might have really helped. On his Facebook page, Harrison's been tracking the sales and posting pictures of Charity Joy and her friends selling cookies in front of a shopping center. It looks like they're having a lot of fun.

This is Charity's first year selling cookies and she is delightfully into it. She writes on her cookie selling page that she's doing this all for love of her troop. "I want to learn to get rid of the box and change the game when it comes to cookie sales! Plus have fun! The sky is the limit," she explains.

On her YouTube page, she also has a video "talking about cookies" to make sure that everyone knows the new kinds of cookies this year and that there are vegan and gluten free options. (You can, she insists, buy Thin Mints even if you're not vegan.) Charity Joy explains her passion for scouting, "I like the Girl Scouts because we get to try new things, and learn new things."

Charity and her dad make a mean cookie selling team together and have likely inspired parents everywhere to step their game up when it comes to slinging cookies. And if you haven't already, remember to buy some cookies from a local Girl Scout before they run out and keep yourself woke.